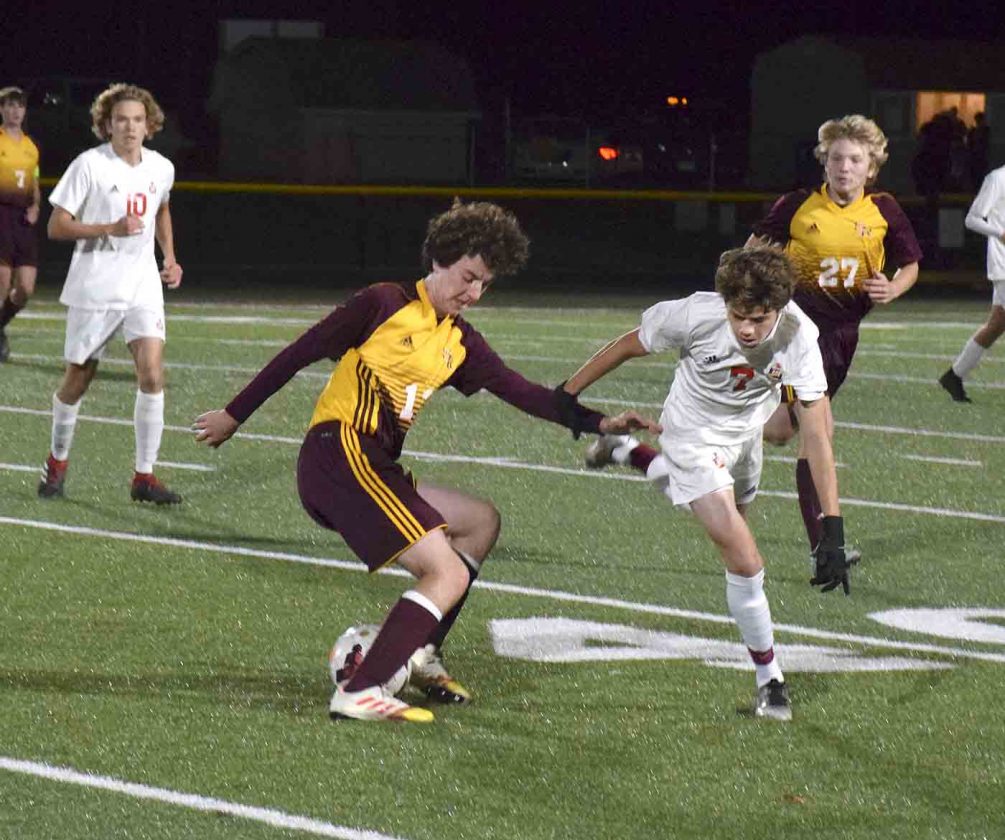 BEAVER TOWNSHIP — A penalty kick is a shot taken 12 yards from the goal line and centered between the touchlines.

The South Range Raiders had given up eight to nine penalty kicks on the year, according to their coach Mike Bailey.

They hadn’t stopped any on the year.

So, when Cardinal Mooney’s Brian Philibin lined up with 19:33 left to attempt the penalty kick, the chances seemed to be in the Cardinals’ favor.

But South Range goalkeeper Matt Lucas’s dive to the left on a kick to the right side of the goal was successful, and it preserved the Raiders’ 1-0 victory in a Division III district semifinal. 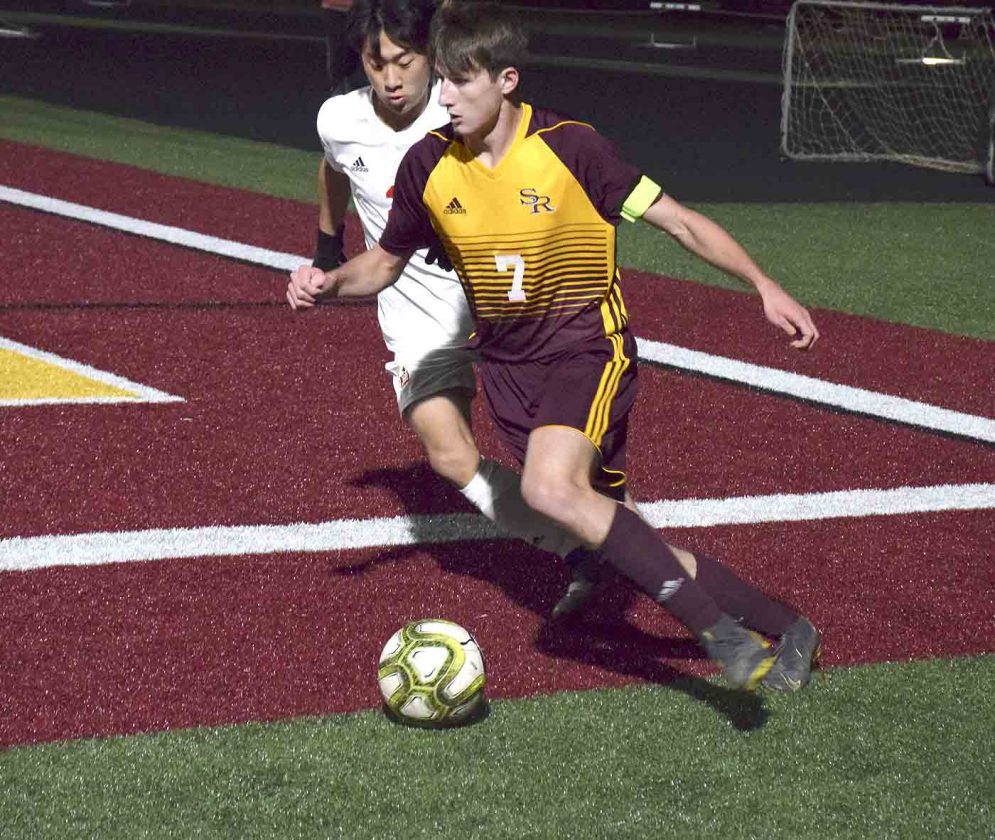 “Matt’s one of the main leaders of this team,” Bailey said. “He’s almost like a second coach on the field for me. We’ve given up a lot of penalty kicks this year. To come up big like that in the tournament, I don’t have anything to say but great things about Matt Lucas.”

Before that point, shots on goal were tough to come by for the Cardinals (10-7-1) as the Raiders (16-2) employed a very aggressive style that was allowed more often than not Tuesday night.

“We press,” Bailey said. “We have a lot of athletic kids. We do like to press people. We like to make sure that when they get the ball, we’re on their back end and not giving them time to make decisions. We want to make life a little hectic for them.”

That play allowed South Range to dictate the flow of the game throughout as they lived on the Cardinals’ side of the field.

“They are a physical team,” Mooney coach Matthew Britton said. “It’s not something we’re used to. It can go either way. The ref will control it, or they’ll let it go. He called it, and then he didn’t call it.” 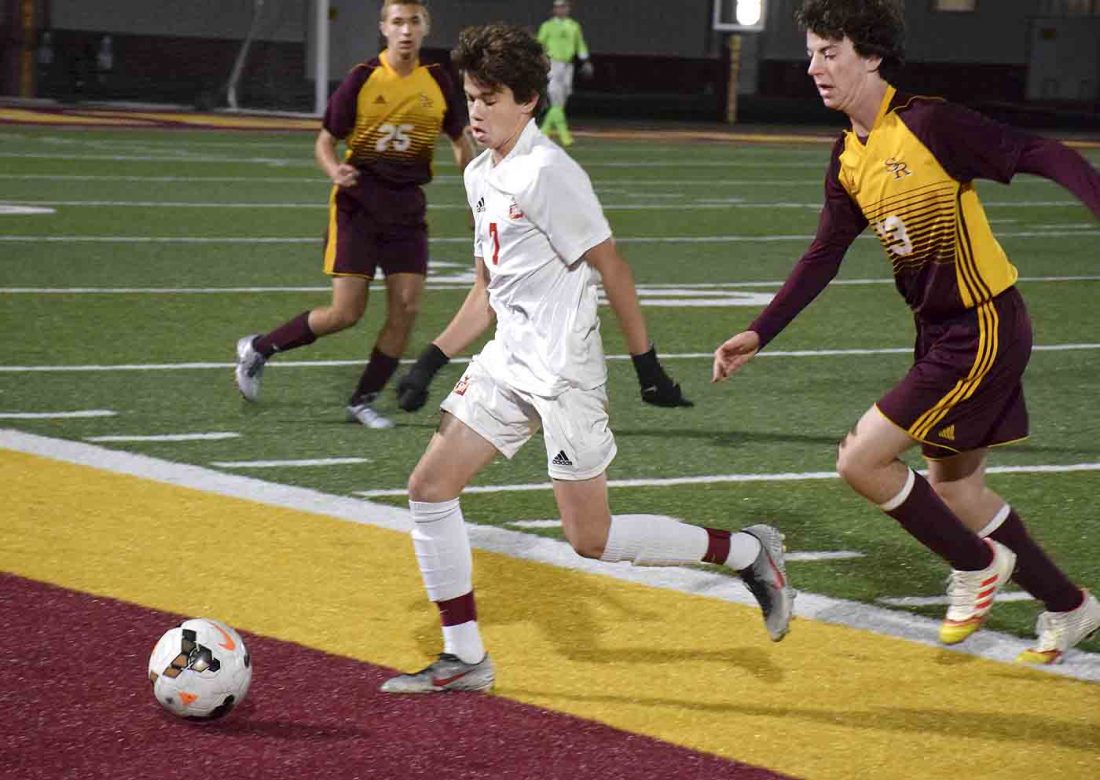 Despite not being used to it, Cardinals goalkeeper Erik Vargo came up big throughout the game with eight saves on nine shots on goal from the Raiders.

“He absolutely made some really nice saves,” Bailey said. “He did a phenomenal job of keeping his team in the game. He was impressive.”

His only hiccup cam when there were less than 2 minutes left in the half. The Raiders had a free-kick from 35 yards out that Vargo initially had in his grasp, but the ball bounced and was rebounded and saved again. Then on the third attempt on goal, this time from Camden Thomas, it snuck into the back of the net to make it 1-0 with 1:11 in the first half.

It was a fortuitous turn of events for Mooney as they seemed to have taken all of the Raiders’ best punches and were poised to go into the locker room tied in a scoreless game. Instead they trailed and had no shots on goal in that first half.

“In the first half, we were trying to hit them more on the counter,” Britton said. “We knew they were a good team possessing the ball. We were trying to play them out. It worked a couple of times. We created some good chances, there weren’t many, we just couldn’t get them in the net.”

The Raiders play Crestview on Saturday for the district title. Crestview’s only loss on the season was to Cardinal Mooney, which made the Raiders earn it every inch of the way.

“I’m really proud of these boys,” Bailey said. “It was a gutsy performance. I said it before at our district meeting, that Matt has taken that team from where they were at the start of the season to the end of the season; I don’t know if I’ve seen a team improve that much during the season. He did a phenomenal job. They were ready to go. You can’t ask for more during tournament time. It’s surviving. That’s what it was tonight.”