Western Reserve airs it out on Jackson-Milton 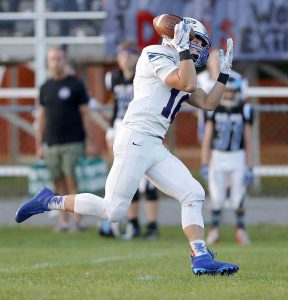 Correspondent photo / Michael Taylor Western Reserve’s Jimmy Mayberry balances the ball on his shoulder before getting possession for an 80-yard touchdown pass in the first quarter against Jackson-Milton.

NORTH JACKSON — Sometimes tough love is the best way to go in a coach-player relationship.

Western Reserve Blue Devils coach Andy Hake admits he has asked a lot of junior quarterback Nick Cavoulas. It’s the one way he knows how to tap into Cavoulas’ growing talent level.

“This is my 11th year here, and we’ve been fortunate with great kids,” Hake said. “I coach him really hard because he has a veteran team, and he has to come through, and he has.”

Cavoulas passed for 266 yards and three touchdowns Friday as the Blue Devils routed the Jackson-Milton Blue Jays, 52-6, in a Mahoning Valley Athletic Conference game. The defense did its part for Western Reserve by returning two fourth-quarter interceptions for touchdowns.

The Devils, who are 3-1 and 1-0 in the MVAC, made a quick statement when Cavoulas hooked up with Jimmy Mayberry on an 80-yard touchdown pass on the first play from scrimmage. The score sparked the Devils to a 26-0 lead before settling on a 26-6 halftime advantage.

“To open the game we just wanted to start strong,” Cavoulas said. “We had two seams up the middle and they had one safety going off to the right side. We just went the opposite way. Jimmy made a nice catch, and it all worked out for us.”

Cavoulas added touchdowns on passes of 30 and 54 yards to Connor Wills in a game plan that had to be exciting to execute.

“I’m loving it,” Cavoulas said of the aggressive style. “The line is blocking, the receivers are running good routes and catching balls. They’re all making me look good.”

The game appeared headed towards an early running clock. Lucky Kiesewetter pushed the Devils’ lead to 12-0 on a 7-yard scoring run. Cavoulas’ two touchdown strikes to Wills made it 26-0 at the 6:02 mark of the second quarter.

The Blue Jays (3-1 and 0-1 in the MVAC) showed resilience when Frankie Prozy hauled in a lateral from quarterback Aaren Landis and threw across the field to a wide open Michael Liberato, who scored on a 25-yard play 48 seconds before halftime.

Jackson-Milton kept the score within the 30-point differential that kick starts the running clock until Josh Miller returned an interception off a deflected pass for a touchdown at the 10:55 mark of the fourth period.

“Our kids battled back, but the wheels kind of fell off towards the end,” Blue Jays coach Nathan Brode said. “I give Western Reserve a lot of credit. That’s a good program, and they were the better team.”

The Devils added to their 26-6 halftime lead when Austin Nabb ran 25 yards for a score midway through the third quarter. The run for the extra two points failed, giving Western Reserve a 32-6 lead.

Miller’s pick-6 was followed by another one when Caleb Durig stepped in front of a Landis pass and ran 94 yards for a touchdown. The Devils added a final touchdown with the backups on the field when Russ Adair turned the left side on a 46-yard run.

The Devils have won three straight since a season-opening loss to Southeast. They’re primed for a road game Friday against rival McDonald.

“You can see we have a nice team,” Hake said. “I think a lot of Jackson. They were a 3-0 team, and they came in pumped up. They gave us a heck of a fight, and then I think the war of attrition kicked in.”

The Blue Jays return to action Friday at Mineral Ridge.