A course of their own 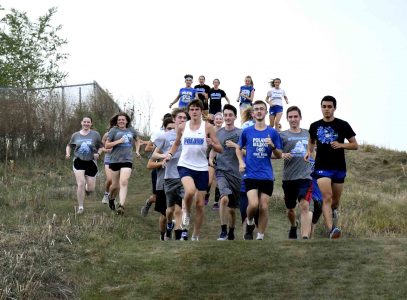 POLAND — One-way traffic on Saturdays, reserved for Poland’s youth soccer. That sign off of Cowden Road, a narrow, paved entrance embraced by a tree line, wasn’t relevant this day.

Runners took yellow school buses. Parents followed. The path eventually opened to what was a quarry pit, having plenty of hills and valleys as far as the eye could see as you looked to your left.

The other side opened up to show the many pitches, although no young people were playing the world’s sport. The entrance to these fields were used to start the throng of runners.

Poland cross country coach Kim Grisdale watched the Bulldogs’ teams come down the hill in front of the fence line.

This modern course was much more challenging, as the Bulldogs were one of three hosts in the third week of Suburban League action Tuesday.

“Having grass to train on is amazing,” Grisdale said. “It’s so much better for their legs. There’s the challenge of the hills, but also the flat of the field.

“It’s really been a big boost for our training.”

It’s a course Poland can call its own.

“It was a lot tougher, definitely, because of all the hills,” Poland senior Gianna Stanich said. “It was a change from all the sidewalks. A lot more hills, but it was a good change.”

Sled riding hill. That was installed. Why not a cross country course?

Eight years ago, Poland’s team held a picnic. Groups collected rocks, getting 3,500 in all. It hardly made a dent in the gigantic rock pile.

Running on rocks. Not a great idea for running spikes or those athletes wearing that footwear.

Tim Dwyer, whose freshman son Jack runs on the team, had older sons, Charlie and Sam, who competed for the Bulldogs.

The elder Dwyer started a fundraising campaign, filling the course with top soil. The hillside was leveled and grated. Grass seed and fertilizer were put down around the course, which is 3.1 miles if you go around twice.

The Poland runners started to rake the course wedged around the former quarry, spiraling up and down.

“You’re running on something you worked on,” Grisdale said.

“When I was helping make the course, I was like this is really cool,” he said. “When I first ran it, I was like, ‘this is not cool anymore.’ It was one of the hardest courses I’ve ever run.

“The hills were tiring. The first one near the start isn’t tiring. As soon as you got into it, it was more tiring.”

It’s one of the most spectator-friendly venues, as Grisdale couldn’t wait to show off the view where you could see 80 percent of the course behind a newly-constructed fence. Take a jaunt up a hill and you’re there.

Sponsor signs are every quarter of a mile, so runners know where they are on the course.

Coaches and spectators can see most of the race and get splits because of mile marks set by Second Sole.

“The course is similar to other things around, but the ability to see most of it is very different,” Grisdale said.

Jack Dwyer hopes for trees to eventually provide shade in years to come.

Grisdale might have a better solution. She is taking seven athletes to Centerville for a night run, which sparked an idea since it was so hot Tuesday. She said there could be lighted areas all over the course, making it a unique race in this area.

There is plenty of work to be done on and around the course before Poland takes on a venture in the dark or light.

“I think that would be a cool thing and get really big in this area,” she said. “I think our coaches would support something like that.”

This undulating course supports a Bulldogs team hoping for more ups than downs with its new practice venue.

The COVID-19 pandemic has wreaked havoc with the sports world, including the cancellation of an event that many ...