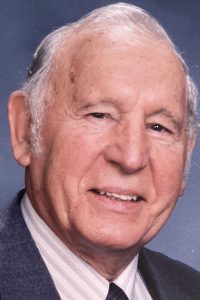 Mr. Rossler was born Oct. 1, 1924, in Weathersfield Township, a son of Carl and Edith (Kline) Rossler.

A lifelong area resident, John attended Scienceville High School. For 38 years, John worked as a brakeman for the P&LE Railroad and was a member of the United Transportation Union No. 3741. He later worked for Wean United as a heat treater for more than 24 years until his retirement in 1974.

He was an active member of the Faith Community Covenant Church, where he served as a deacon, and previously served as an officer at the Salvation Army. Throughout the years, John enjoyed bowling, fishing, playing cards, putting together jigsaw puzzles, and traveling with his wife to many places. He also enjoyed occasionally wintering in Florida.

A proud veteran, John served in the Army during World War II from 1943 until his honorable discharge in 1946 with the rank of private first class.

In addition to his parents and wife, John was preceded in death by his former wife and mother of his children, Lena Snodgrass Rossler; stepdaughter, Gwen Neumann; and sisters, Edith Zambrini and Matilda Hetrick.

A funeral service will be held Saturday, July 18, 2020, at 10:30 a.m. at the Cunningham-Becker Funeral Home, 270 N. Main St., Poland. Entombment will follow at Lake Park Cemetery. Family and friends will be received on Saturday from 9 to 10:15 a.m. at funeral home, prior to the service. Due to COVID-19, the 6-foot rule will be honored, and we ask that all guests, whose health allows, wear a mask. For the safety of everyone, we politely ask that visitors not staying for the service, do not linger at the funeral home after seeing the family.

The family would like to express sincere appreciation and thank John’s church family and the staff and residents of Greenbriar for their friendship, support, and care given to John.