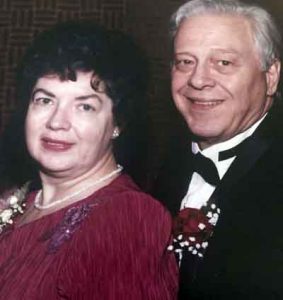 YOUNGSTOWN — Henry Elmo Miller Jr., 88, passed away peacefully Saturday, July 18, 2020, surrounded by his six sons. In a remarkable coincidence, his death occurred on the anniversary of his father’s death, to the hour, 68 years ago.

A lifelong resident of Youngstown, Mr.Miller was born Oct. 25, 1931, to Henry Elmo and Edith Marie (Edmiston) Miller. He married Patricia Ann McGowan on Nov. 22, 1962. They were married 49 years before her passing in 2012. In addition to his wife and parents, he was preceded in death by his sister, Mary Angela Fischer in 2017.

A 1949 graduate of Ursuline High School, he matriculated at John Carroll University where he was enrolled in the Reserves Officers’ Training Corps and earned his Bachelor of Science degree in history in 1953. Immediately upon graduation, Mr. Miller entered the United States Army as a second lieutenant and was stationed in South Korea following the signing of the armistice, as a transportation movement control officer with the Eighth United States Army. After his tour of duty, he returned to Youngstown as a reservist. However, in October 1961, Mr. Miller was recalled to active duty during the Berlin Crisis and stationed at Ft. Eustis, Va. In 1962, he was honorably discharged from the U.S. Army, after earning the rank of captain, and was the recipient of the National Defense Service Medal.

Mr. Miller taught English and social studies at Cardinal Mooney High School, beginning in 1961, and earned his Master of Education from Westminster College in 1964. He then served as director of guidance for 31 years at Boardman High School, before retiring in 1998. His passion for teaching brought him out of retirement the following year for a brief period when he served as interim principal of Stadium Drive School.

“Elmo,” as he was known, had an impressive and unique palette of knowledge, which ranged from history and politics to sports and entertainment, from philosophy and engineering to music and the arts. He followed many sports, but had a special affinity for baseball and was a lifelong fan of the Cleveland Indians. He was never afraid of speaking his mind and was fond of expressing his opinions to the editors of various publications. A voracious reader of literature and plays, Elmo was conversant in all genres from Shakespeare to Hemingway, with a strong preference for the classics. A noted history buff, Elmo loved American history, particularly its Civil War. Perhaps his most noted interest was his deep appreciation for the performing arts which included theater, film and classical music. But undeniably, his greatest love was opera, which began during his college years. He knew the synopses and arias from the operas of Verdi, Mozart, Puccini, Strauss and Wagner and followed the weekly live broadcast from the Metropolitan Opera for over 50 years. Although he once described himself as a frustrated singer, he found the power of music a means by which to inspire and comfort his soul.

For those who knew him well, Elmo was a man of high moral character, integrity and principle. A devout Catholic, he possessed a knowledge of many of the world’s religious faiths and often challenged the many comparative and contradictory elements of their foundations. He liked to reference Mark Twain’s observation that “faith is believing what you know ain’t so.” However, he also firmly believed that an educated man, regardless of his individual beliefs, knew the Bible.

Elmo leaves behind six sons of whom he was immensely proud. In the years since the passing of his wife, he loved his extended visits with each of them at their homes throughout the country. He often quipped that each son was his favorite — Christopher (Angela) of Newark, Gregory (Laura) of Silver Spring, Maryland, Sean (Stacey) of Canfield, Patrick (Virginia) of Honolulu, Hawaii, Michael of Pittsburgh, Pa.; and Ryan of Milwaukee, Wis. He also leaves behind 13 grandchildren, Kathleen, Marjorie, Lilan, Winston, Emerson, Olivia, Owen, Tessa, Quinton, Harrison, Karsten, Zachary and Andrew; two nieces, Anne and Jill Alikonis; one nephew, Bernie Fischer; and brother-in-law, Robert McGowan.

Due to the current health crisis, everyone is asked to practice all social-distancing guidelines.

His family wishes to extend their sincerest thanks and appreciation to the caregivers and friends who were with him during this past year. His family asks that all donations, in the memory of Henry E. Miller, be made to the Hospice of the Valley of Youngstown.

Family and friends may visit www.foxfuneralhome.org to view this obituary and send condolences to Henry’s family.