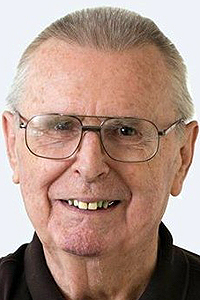 CANFIELD — Brother Maurice Dismas Beique, 84, was born April 20, 1936, to his father, Eudore, and mother, Lydia Labbe, in Auburn in the State of Maine, in the northeast of the United States, about 100 kilometers from the border with Canada.

He was baptized after five days in the parish church of St. Luis, Diocese of Portland. He has a brother and sister in the family.

Before joining the Congregation in the 1950s, he worked for the U.S. Air Force.

His first apostolic assignment was an offset lithographer. About 10 years later, he graduated from Canisius College. Thereafter, he was transferred to the community of Canfield, where he worked in the audiovisual sector, an apostolate that allowed him to record authors of national fame, such as Father Jerome Murphay O’Connor, op, Father Stephen Doyle, ofm, and Father Lawrence Boadt, csp. He also was responsible for editing and graphics in this sector.

For 30 years, he was involved in this apostolate, with the additional service of provincial councillor on several occasions. In addition, he was part of the staff that was responsible for the television broadcast of the Mass in the Dioceses of Canfield and Youngstown. In recent years, he was the treasurer of the community, a responsibility that he left at the beginning of this year for health reasons.

Recently, Brother Dismas had been experiencing walking problems, and for this reason, had to undergo physiotherapy. Last Thursday, June 25, while he was in his room, he fell ruinously. Taken to the hospital, the doctors diagnosed symptoms of pneumonia and simultaneously found the coronavirus also. Two days ago, he also suffered a cardiac arrest, which he managed to overcome. Unfortunately, all these problems became fatal to his health, and on Monday, June 29, 2020, he ascended to Heaven.

A humorous and always cooperative person, he made himself available to his confreres in the apostolate and the community. He was a brother graciously remembered by all.

Brother Dismas greeted us on the day of the Solemnity of Saints Peter and Paul. We can say in the words of Blessed James Alberione, a thought found in the Pauline Agenda on June 29th are well suited to describe the Pauline life and mission of our Disciple of the Divine Master: “St. Paul’s heart was continually gripped by the love of Jesus Christ and gripped by the love of souls because his heart was animated by the same feelings as the heart of the Divine Master. Then, zeal for the salvation of souls. Not many words, but many things for souls.”

May Christ welcome him and may he enjoy the bounty of the Father’s goodness, together with the Pauline Family in Paradise.

Due to our current health crisis, a private Mass of Christian burial will be held for the community at the Society of Saint Paul Monastery in Canfield at a later date.

Brother Dismas’ interment will be in the cemetery at the the Society of Saint Paul in Canfield.

Arrangements have been entrusted to the Fox Funeral Home, 4700 Market St., Boardman.

Family and friends may visit www.foxfuneral home.org to view this obituary and send condolences.