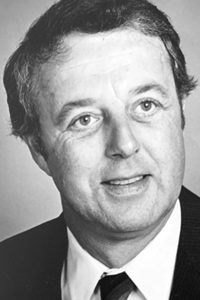 Mr. Burnbrier was born June 30, 1941, in Canton, to the late Carl and Muriel Rodebaugh Burnbrier.

A 1959 graduate of Lincoln High School in Canton, Tom attended Ohio University until enlisting in the United States Army. He served in the Military Police Corps during peace time in both the U.S. and Korea. Through the United States Armed Forces Institute, Tom graduated from Pacific University in California. He completed the studies of The Insurance Institute of America and received a Certificate in General Insurance. He earned the Chartered Property and Casualty Underwriter (CPCU) and Certified Insurance Counselor (CIC) professional designations.

Tom worked in the insurance industry, beginning in 1964 as a claims adjuster with The General Adjustment Bureau and later as a marketing representative with Westfield Companies.

In June 1967, Tom married Sharon Goodnight Rohr. They moved to Boardman and, later, Poland, where they lived for many years.

In 1968, Tom joined the Moore- Peterson Company in Youngstown as an agent and in 1976 became the vice president. In 1987, Tom became president and CEO until his retirement from Moore-Peterson in 1998.

Tom was past president of the Mahoning County Independent Insurance Agents Association and past president of the Mahoning-Shenango Chapter, Society of CPCU. He served on the National Agents Advisory Boards of several insurance companies, including Aetna Casualty & Surety, where he was elected by his fellow agents as a national spokesman. Tom also served on the Consumer Protection Advisory Board, Ohio Department of Insurance. Tom received a special award for assisting students studying for their CPCU designations.

An active member of the community, Tom served on the District Board of Key Bank, was an active member of The Youngstown Jaycees and was a graduate of Leadership Mahoning Valley. Tom was a member of the Boardman United Methodist Church, where he served as an usher, as well as trustee, finance chairman and president of the administrative board.

Tom loved baseball and, for over 17 years, especially enjoyed coaching children in Boardman and later, Poland. He was past president of the Poland High School Booster Club and was elected into the Poland Baseball Association Hall of Fame.

Tom leaves his wife of over 52 years, Sherry of Boardman, and their son, David and granddaughter Samantha of Poland; and his loving granddog, Barkley. He leaves his stepchildren, Kathy (Scott) Brown and her children of Florida; Timothy (Leane) Rohr and his daughter, Courtney of Pastaskala and Thomas Rohr and his children of Leetonia. He also leaves his sister, Jackie (Richard) Ranalli of Canton; brothers-in-law, Kenneth (Margaret) Goodnight and Robert (Donnette) Goodnight; and his 103-year-old mother-in-law, Wanda Goodnight, all of Massillon.

In addition to his parents, Tom was preceded in death by his sister and brother-in-law, Nancy and Dick Romigh of Louisville, and a niece and nephew.

There will be no services or calling hours.

Tom’s family offers their blessings to the doctors and nurses at St. Elizabeth Boardman Hospital.

In lieu of flowers, Tom’s request was that memorial tributes take the form of contributions to the Boardman United Methodist Church, 6809 Market St., Boardman, OH 44512.

Arrangements are being handled by the Cunningham-Becker, Poland. Condolences may be sent at www.beckerobits.com.