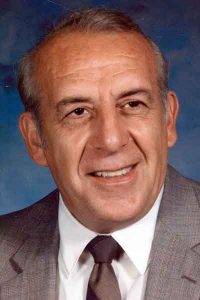 He was born March 8, 1933, in Youngstown, the son of George and Katherine Horeth Raidel. Dick was the next to the youngest of 11 children.

He was of the Christian faith and very active in churches throughout his life.

On Nov. 24, 1955, he married his wife of 64 years, Adrienne Hiestand. They lived most of their married life in Champion, where they raised three children.

Dick attended Austintown Local Schools and graduated in 1950 from Fitch. He played football and track while at Fitch. He was named to the All-County Team in his senior year.

Upon graduation, Dick enrolled at Kent State University. He obtained his bachelor’s degree in 1954 and his master’s degree in 1961. He played football while at Kent, at the early age of 17. During his career in college, he was selected to the All-Mid-American Conference Team. He was team captain his senior year. Dick was drafted by the Cleveland Browns and had a tryout with them in 1955.

After serving 44 years in education, he retired as superintendent of Lakeview Schools. Lakeview honored him by naming the school’s auditorium the Richard Raidel Auditorium. After his retirement, he served as an interim superintendent at Lordstown Schools and Bristol Local Schools.

Memories of Dick will be carried on by his loving wife, Adrienne, of Howland; one daughter, Robin (Tom) Hosler of Sylvania; and two sons, Rick (Mary Ann) of Bristolville and Randy (Pam) of Champion.

Memories of Dick will also be carried on by Dorothy Jobigy of Austintown, Dick’s only surviving sibling.

Besides his parents, Dick was preceded in death by his sisters, Catherine, Marie, infant Rose, Rose, Helen and Matilda; brothers, George, John and Robert; and nephews, Michael (Rennie) Bokesh and Gary Raidel.

The funeral service will be held 11 a.m. Wednesday at the funeral home, with the Rev. Matt Lowe officiating.

Dick will be laid to rest in Crown Hill Burial Park in Vienna.

The family suggests any memorial contributions be made to the Lakeview High School Fine Arts Program in Dick’s name.