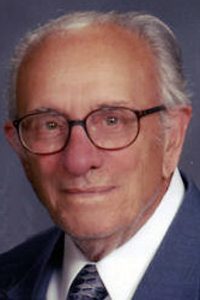 Pat graduated from East High School in Youngstown in 1940.

He enlisted in the U.S. Army Air Corps in 1942. He completed aerial gunnery training in Fort Myers, Fla., with the rank of sergeant and then attended radio school in Sioux Falls, S.D. He began training as a pilot at Luke Field in Phoenix, Ariz., and graduated in 1944 as a flight officer. He entered fighter pilot training flying P-40s at Luke Field, P-39s in Victorville, Calif., and P-38s in Santa Maria and Santa Rosa, Calif.

He was discharged from active duty in 1945 as a second lieutenant and remained on reserve status. He completed several courses from Air University Industrial College of the Armed Services and concluded several active duty tours, including one at the Cold War Plans Division at the Pentagon. He was assigned to the U.S. Air Force Academy as a liaison officer, serving from 1961 to 1973, retiring as a major.

Pat graduated from Youngstown College in 1948 with a bachelor’s degree in social science and from The Ohio State University in 1951 with a master’s degree in arts. One of his requirements was to write a thesis regarding the teaching of controversial issues in high school. He also received credits from Ohio University extension programs as well as earth and physical science programs at John Carroll University and Baldwin-Wallace University.

Pat taught at Champion High School from 1948 to 1950. He moved to Lorain and taught social studies at Hawthorne Junior High School and Lorain High School. He also taught evening adult classes at Admiral King High School, as well as summer school classes up until his retirement in 1983.

He enjoyed a lifetime of classical music and was an avid sports fan.

He was preceded in death by his wife of 67 years, Teresa Marie Casalini Simone, on Oct. 8, 2015; parents Vito and Luigia Milano Simone; granddaughter Carey Flores in 2009; great-granddaughter Angelica Flores in 1994; his sister, Theresa Malambri; and his brother, James Simone.

Burial will follow in Calvary Cemetery in Lorain, where AMVETS Post 32 of Elyria will conduct military honors.

Online condolences can be made at www.gluvna.net.