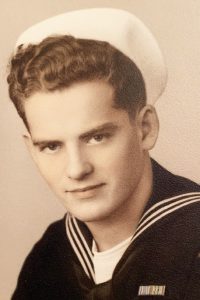 Paul was born June 23, 1923, in Youngstown, graduating from Woodrow Wilson High School in 1942. He then served his country in the U.S. Navy on board the USS Augusta, fighting in World War II. He was in the Normandy invasion and also played steel guitar for President Truman while on board ship during the war.

After the war, Paul married, started a family and played steel guitar with the Jimmy Kish Band part-time.

Paul attended upholstery school, worked a life-long career as a self-employed upholsterer and also as a machinist at Metal Carbides Corp. for 31 years.

He was a founding father and member of the Mahoning Valley Old Car Club, having restored numerous British sport cars; he was a 32nd degree Mason Argus Lodge 545 in Canfield; an avid dancer; and a member of the New Castle Country Music Association. He also enjoyed travel, home projects and building clocks.

In addition to his parents, Dimitrius and Erene Raptou, he was preceded in death by a brother, Dr. Alexander D Raptou; a sister, Mrs. Theodora (Lola) Dusckas; and the mother of his children, Mrs. Doris Raptou.

Paul was a member of St. John’s Greek Orthodox Church. At Paul’s request, a private funeral service was held and he was laid to rest in Green Haven Memorial Gardens.

To view this obituary or to send condolences to the family, please visit www.vaschak-kirilafh.com.