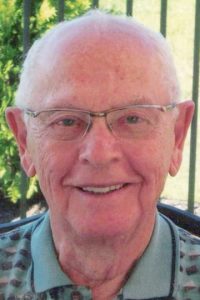 The son of immigrant parents, Andy grew up on Center Street on Youngstown’s East Side. He was nicknamed “Larry” by his Hazeltine friends, a name that followed him throughout his life.

At East High School, he distinguished himself as a student and achieved National Honor Society recognition. After graduation, he entered the Army and served in the Pacific Theater during World War II. Rising to the rank of technical sergeant, he was sent to New Guinea, the Philippines and to Japan for the postwar occupation. While in Japan, he witnessed the nuclear devastation of both Nagasaki and Hiroshima.

Upon his return, Andy became the first in his family to earn a college degree, a B.S. in Business Administration from Youngstown College. He entered the steel industry, starting with a short stint at Fitzsimmons Steel before embarking on a 30-year career at U.S. Steel’s Ohio Works. Hired as an industrial engineer, he advanced to the level of general foreman in charge of both the 40″ and 43″ mills. In 1967, he was sent to Italy to help develop U.S. Steel’s European subsidiary, Italsider. He retired in 1980 upon the closing of the Ohio Works.

Andy was a member of St. Christine Parish for more than 60 years. He enjoyed bowling, golf and Ohio State football.

Until reaching his mid-90s, he participated regularly in Silver Sneakers senior exercise classes, where he made a number of friends he enjoyed very much. He spent several years serving as treasurer of a local Greek Catholic Union lodge and was awarded the national organization’s Hall of Fame recognition.

His travels took him to Europe, where he met family members in Slovakia, throughout the continental United States and Hawaii. He visited Texas on multiple occasions, where he enjoyed both family and other friendships.

Andy was known as a kind, generous and patient man who cared deeply for his family and friends. He will be missed greatly by those who had the good fortune to know him.

Besides his parents, Andy was preceded in death by brothers, John, Michael, Matthew and Joseph; and sister Mary Loyan.

To view this obituary or to send condolences to the family, please visit www.vaschak-kirilafh.com.