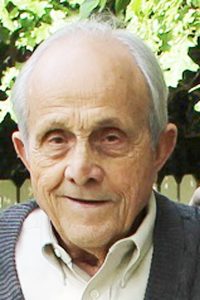 Throughout an extended illness, Ray made clear his desire to fight through to remain connected to his 12 great-grandchildren; 18 grandchildren; six children, and his wife Judy of 64 years.

Raymond was a 1946 graduate of Niles McKinley High School, employed as a delivery and salesman for The Warren Sanitary Milk Co. for 26 years and also at D’Urso Bakery for 18 years, retiring in 1996.

Ray was a member of Our Lady of Mount Carmel Parish in Niles, church altar boy and male choir. He was also a member and past commander of American Legion Post 106 in Niles, San Fellipe Neri Lodge in Niles, Niles McKinley Band Boosters, and several bowling and golfing leagues. He took great pride as caretaker of Niles Historical Society’s Ward Thomas House and also hosting foreign exchange students through The American Field Service.

Ray deeply loved his family including a large extended family he would see at annual reunions over the last 37 years.A life long resident of Niles, he and Judy traveled the country to see family and spend winters in Florida. Yet, if ever there was a man who followed the credo “There’s No Place Like Home,” it was Ray Donadio. He loved all things Niles.

He was preceded in death by his parents; a granddaughter, Lindsay Rose Donadio; and five brothers.

Friends may call from 4 to 7 p.m. Sunday at The Joseph Rossi and Sons Funeral Home in Niles, where The Mount Carmel Bereavement Ministry will conduct prayers at 6:30 p.m.

A Mass of Christian Burial will be 10 a.m. Monday, at Our Lady of Mount Carmel Church in Niles, preceded by a 9:30 a.m. prayer service, at the funeral home.

Burial will be in Niles City Cemetery, where Ray will be honored for his military service by The Trumbull County American Legion Honor Guard.

Memorial contributions can be made to Hospice of The Valley Hospice House, 5190 Market St., Youngstown, Ohio 44512

Arrangements are being handled by The Joseph Rossi and Sons Funeral Home in Niles.

Family and friends can light a candle, sign the guest book, and send e-mail condolences at www.josephrossifuneralhome.com.