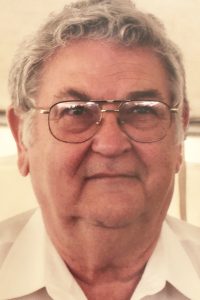 Ted was born May 4, 1935, in Clarksburg, W. Va., the son of the late Howard and Pauline Oldaker McIntyre.

Ted served his country in the U.S. Army. He retired from General Motors security department in 1995.

He enjoyed hunting and cooking, among many other hobbies. Ted was an active member of Bible Baptist Temple in Campbell, where he was a trustee for many years, as well as serving in other capacities around the church. He loved helping anyone in need…Ted’s time was your time.

He is survived by his wife, the former Peggy S. Garrett, whom he married Jan. 16, 1982…a day with record temps and snow fall… but the warmth of their marriage never diminished over the years. He adored her to the very end, with his final words being, “I love you.” Ted was the absolute love of Peggy’s life.

He was preceded in death by his parents; a son, David McIntyre; a sister, Eula Briedenbach; and two brothers, Bill McIntyre and Ed McIntyre.

Family and friends may call from 5 to 7 p.m. Friday, Sept. 13, 2019, at Higgins-Reardon Funeral Home, Boardman-Canfield Chapel.

A funeral service will be held 10 a.m. Saturday, Sept. 14, at the funeral home, with military honors being held prior to the start of the service.

In lieu of flowers, material tributes may take the form of donations to Bible Baptist Temple, 230 Lettie Ave., Campbell, OH 44405.