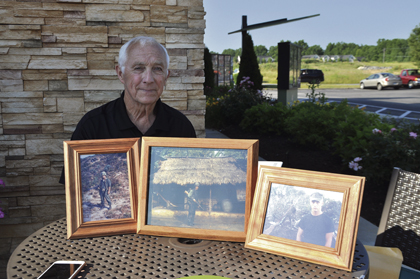 During his time in Vietnam, James Guterba said things like clean water and socks were luxuries. Luckily, the Marines veteran made it through the conflict without getting injured, although his canteen and pack were shot.

CANFIELD — As he made his way through the jungle, James Guterba never thought that exact experience would lead him to an evening with Robert DeNiro.

“He wanted to talk to me about my experiences in Vietnam for the making of the 1978 movie ‘The Deer Hunter,’ ” Guterba said.

DeNiro was staying in Youngstown. One day after work, Guterba made his way to the hotel, where he was greeted by the star.

They even had doughnuts and coffee, Guterba said.

“No one’s going to believe this,” he told DeNiro, who then took a piece of hotel paper and scribbled a note to the veteran. Weeks later, the actor sent a photo to Guterba.

Intending to play football at Youngstown State University, Guterba said an injury kept him from practice.

“Horsing around, I dislocated my shoulder,” he said.

Discovering he didn’t like the college setting, Guterba went downtown to the recruiting office and joined the Marines.

He started in South Carolina and ended up at Camp Lejeune in North Carolina and later California, where he was assigned to a machine gun weapons platoon.

By ship he went to Okinawa, training at Camp Fuji in Japan. Guterba was with the C company First Battalion Third Marines at that time.

Out at sea on a World War II ship, Guterba said that that’s when he and his brothers on board heard the USS Turner was joining the USS Maddox.

Watching gunners running toward their mounds and hearing the general quarters making an announcement on the PA system, Guterba said he watched everything, noting it was surreal.

“I thought, ‘This is like what you see in the movies,'” he recalled.

Luckily, that was all that came of Guterba’s involvement with the Gulf of Tonkin incident.

In the time that followed, Guterba said he trained to live off the land in Japan and the Phillippines.

While in the jungles, Guterba said that soldiers would go “so long without water” that their tongues and lips would crack.

“We knew something was up when we did more intensive training” in 1964, he said.

It was one day during breakfast that a World War II and Korean War veteran, who was also in line to eat, said, “Uh oh, you know what this means,” referring to the steak and eggs they were eating, Guterba said.

Just as the soliders finished their breakfast, Guterba recalled that everyone made their way to the hanger deck, seeing aircraft dropping artillery and napalm.

Again, “it was like watching a movie,” he said. “We were stunned.”

In a way, many of the soliders grew up in that instant, as Guterba said that many had not seen a dead body except at a funeral home.

Going to the shore by helicopter to engage in Operation: Starlite, Guterba said that almost immediately there was something that was noticeable.

“We got in there, and you could smell the gun powder. The stench of death,” he said. “It was just awful.”

Luckily, Guterba wasn’t injured during his time in conflict, although his canteen and pack were shot through.

Throughout his life, he’s learned to take advantage of opportunities, as many weren’t able to after the war, ranging in reasons from death to having psychological problems.

“Those guys would kick me in the behind. I’m able to experience things they would never be able to experience,” Guterba said. “I have to take advantage of what they did, how they protected me on many occasions.”

One opportunity he took was to go back to college.

Attending YSU for a bachelor’s in health and physical education, Guterba then went to Kent State University for a master’s in the same, and then certification in guidance counseling and administration at Ashland University.

He taught at local schools and YSU, then moved his way up to principal. In 2003, Guterba retired from the Boardman Local School District as vice principal.

Guterba and wife Linda have two children: daughter Amy, a pastry chef in Florida, and son Brian, who is an author and entrepreneur.

While many veterans don’t have fond memories of Vietnam, Guterba has gone back to the country three times.

The people, he recalled, are friendly and welcoming, as he looked through photos of his travels to the country since the 1990s.

“The things I saw happen. … We were most afraid, a lot of us, of the fear of being a coward in front of our brothers.”