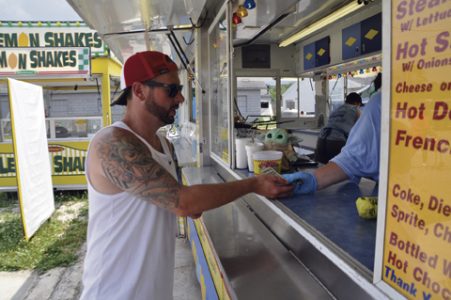 Jeff Myers, of Austintown, makes a quick stop to grab a sandwich at the Molnar's Concessions stands on Mahoning Avenue Friday. Myers said that whenever he sees a concession stand, he tries to make a quick stop to support local. After hearing the Canfield Fair will be cancelled this year, Myers said he was "crushed," and he and his young children have turned it into a tradition.

AUSTINTOWN — This year has been unique, to say the least.

As events cancel as the year progresses, even the Canfield Fair hasn’t been immune to the COVID-19 pandemic.

Last week, the cancellation of the 174th Canfield Fair was announced by board members.

“We stretched out as long as we could” regarding making a decision, said George Roman, director of grandstand entertainment and concessions after the announcement Tuesday.

One of the reasons behind the decision was vendors needed to know sooner rather than later.

For Molnar’s Concessions of Austintown, the cancellation is going to wreak havoc on its bottom line.

“It’s devastating,” said Faith McGee, co-owner of the family-owned business. “This year has been an odd, odd year.”

Molnar’s offers everything from lemon shakes to fries, and hoagies to cinnamon buns.

McGee said the Canfield Fair usually brings in about 40 percent of the business’ annual revenue.

Molnar’s normally has 13 stands spread throughout the fairgrounds.

This year, with other fairs and carnivals canceling, the concessions industry is feeling the impact.

“It’s been a big hit for our industry” McGee said of the pandemic.

Also feeling the pinch will be T’s Concessions, also of Austintown.

Owner Tyler Bell said that his stand will lose about 10 percent of its revenue this year with the fair cancellation. T’s Concessions sells iced tea and lemonade.

“This would have been our fourth year at the fair,” Bell said, adding that he usually has one stand at the Canfield Fair.

Both Molnar’s and T’s each have other stands that run throughout the warm months. Molnar’s has been participating in fair food drive-thrus and has stands on Mahoning Avenue in Austintown, and T’s has a setup at the Four Seasons flea market, Youngstown Flea, both in Youngstown, and Rogers Flea Market in Rogers.

Each said they will miss seeing their employees and regular customers at the fair.

“I’m missing the people very much so. They are family to us,” McGee said. “We miss that socializing with them.”

For Bell, it’s seeing friends and family that make the annual trip back to the greater Youngstown area that he’ll miss.

“(The fair) brings people back into town, and I can see them,” he said.

Concessionaires aren’t the only ones who will miss the fair environment.

On Friday, Austintown resident Jeff Myers made a quick stop to the Molnar’s stand.

“I was pretty depressed because my kids and I have been going for many years,” Myers said.

When he can, Myers tries to get his “fair fix.” He said he and his kids stopped at a stand on the way home from West Branch recently.

Myers is also in a tribute band, ’80 Proof. Usually, the band plays in the grandstands, but unfortunately that will not happen this year. “It was very crushing” to hear that the fair, along with other local gigs, were canceled.

Although it will impact Molnar’s and T’s financially, McGee and Bell each said they understand why the decision was made, and health comes first.

McGee said Molnar’s, which has been in business for 52 years, has seen just about everything. McGee co-owns the business with her father, James Molnar.

The pandemic, however, is different.

“This is closing our doors,” she said. “The mom-and-pop places will lose their businesses by next year,” she predicted.