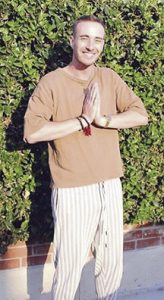 Struthers native Tim Roddy, 27, turned to holistic healing after physical exercises didn’t provide relief stemming from a herniated disc in the lumbar region of his spine.

STRUTHERS — Struthers native Tim Roddy decided to use pandemic down time to share his journey with holistic treatment.

After years of back issues with a herniated disc in the lumbar region of his spine, Roddy turned to meditation when exercise didn’t produce relief.

“It was just kind of sitting in this position. Through guided meditation, I was able to move energy around. I got up and didn’t have any pain at that point,” he said, calling from his home in Los Angeles.

Roddy was home in the Valley during the pandemic, quarantining with his family, when he decided to start his podcast, “Tim Roddy, the Podcast.”

“I thought a podcast would be the perfect platform, so I just started with that,” he said.

The first few episodes were introductory, Roddy said, sharing his background and leading some meditation practices.

“I wanted to keep it as natural, honoring what my journey was through it all,” he said.

As time continues, he will add guests and tailor episodes using feedback from social media.

The 27-year-old said he tried everything including a holistic approach, which he said gave him the most reprieve.

“It was my first experience with any form of meditation. It made a difference,” he said.

Ultimately, he had to have back surgery but said meditation left him feeling recharged and relaxed.

“It was the power of the mind versus any form of exercise that you could do” that seemed to help his back, Roddy said.

The podcast content is broad, Roddy explained, ranging from self-empowerment to the supernatural.

“It all trails back to energy,” he said.

Roddy, who also works at a meditation studio in Los Angeles, began the holistic approach when he took a meditation class.

From there, he’s taken other courses, such as an intuitive healing course.

“I really fell in love with it,” he said, and he has also been researching topics on his own.

Soon after graduation, he moved to Los Angeles, where he works at Dolce and Gabbana.

Roddy said his job at the meditation studio is his “fun job.”