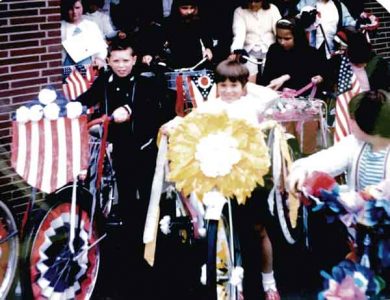 Submitted photo Tim Czuba and his sister, Laura Czuba, prepare for the annual bike parade in Canfield, which was a long-honored tradition the Junior Women’s League supported. The kids would decorate their bikes to ride down Broad Street, finishing on the Village Green for a snow cone. Tim is shown with his patriotic shield and Laura with her huge flower in this photo from the late 1970s.

CANFIELD — Judy Czuba Palermo is a lifelong Canfield resident who has taken up the pen to help preserve memories. This month she’s reflecting upon the annual Fourth of July parade, which had people coming from all over to watch or to take part.

Palermo has witnessed many parades and has taken part in them as well. This year’s parade, though, was canceled out of caution during the ongoing and increasing COVID-19 pandemic.

Using her writing talents, she wanted to share her memories of past parades with the community.

The 2020 Canfield Fourth would have been the 52nd parade Palermo attended. She recently decided to write about the parades on the blog on her website, My Heart In Pen, which can be found at www.myheart inpen.com.

The 1986 Canfield High School graduate recalls decorating her bike along with her brother Tim and sister Laura. The large group of bicyclists would be stationed at a side street in town, then filtered into the parade as a large group. The kids enjoyed it because they were actually competing for ribbons, but all the riders got a snow cone treat when they’d completed their trek around the Village Green.

Her parents, Ron and Adrienne Czuba, were just as active in the parades of the 1970s and ’80s. Ron, who owned a Model A Ford, enjoyed driving his vintage machine in the parade. Adrienne was a longtime member of the Canfield Junior Women’s League who also played a big role in the annual parade.

One other involvement for Judy’s father was in serving as a troop leader for Boy Scout Troop 115 out of St. Michael Church. In the mid-1970s, the troop assembled a mechanical eagle float. The large eagle would flap its wings as it progressed along the parade route.

“After all these years, I can still picture it rumbling down Broad Street on the back bed of a tractor,” Palermo said. “There was nothing quite like the homemade floats from the 1970s.”

She said during the last parade her father watched before his death, he still spoke with pride about his beloved Boy Scout eagle.

As the Czuba family aged, there were more parades observed from the sidelines, but the parades were something they never missed.

Canfield Mayor Richard Duffett said Palermo “has some great memories and reflections from past Fourth of Julys.”

He said all Mahoning Valley residents should take time to reflect on past parades and events, and how they brought people together.

She said it was her mother who inspired her to open the website.

“I credit my love of writing and reading to my mother,” Palermo said. “In my blog post, titled ‘Words,’ it tells the story of her never denying me of a book purchase. In turn, growing up I had a large home library and many journals in which I wrote as a teenager. Most of my career choices were literacy-based and I had several jobs that included some form of writing.”

What will Palermo be doing today? She put in her blog post: “I’m pretty sure I’ll be having red-, white- and blue-colored dreams thinking about my Canfield parade, with Barney Fife from ‘The Andy Griffith Show’ waving his flag somewhere in the crowd. Happy Fourth of July!”