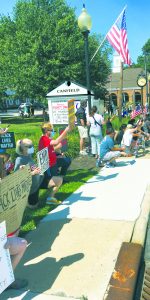 Correspondent photo / Sean Barron A gathering of Black Lives Matter supporters forms on one side of East Main Street near U.S. Route 224 in Canfield for Sunday’s BLM rally calling for an end to all forms of racism.

CANFIELD — Rylee Reese Stanley was anything but shy when it came to expressing the primary underlying belief that fueled her activism.

“I’m here because when people use Trump and America as contradictions for equality, it shows the deeply rooted issues in this country,” the 16-year-old Ursuline High School student explained.

Rylee was referring to her participation in a Black Lives Matter rally Sunday in Canfield, which called for an end to all forms of racism, as well as to address what many see as the need for greater diversity, inclusion and equity in Canfield.

Across East Main Street (U.S. Route 224) from the hundreds of BLM supporters was a group of pro-Trump counterprotesters. Both groups exchanged continual chants with each other, but the event was peaceful.

Hosting the BLM gathering was Solidarity in the Suburbs, a grassroots group that plans to form four action teams in Canfield: one each for law enforcement, city government, churches and the board of

education. The main thrust is to create dialogue regarding greater inclusion and diversity, along with a strong and robust anti-racism policy, noted Jay Cohen, a Solidarity co-founder.

Rylee, who came with her mother, Morgan Stanley, said her presence at the rally also reflected her desire to see people of all races being treated equally. Adopting such a stance will make Canfield a more welcoming place, she added.

One person who would like to feel more welcome driving through or visiting the Youngstown suburb was Ke’Lynn Dean, 18, of Youngstown, who’s a Mahoning Valley Sojourn to the Past member.

“Canfield does not welcome black people. The only time Canfield welcomes black people is at the Canfield Fair,” said Dean, who plans to major in musical engineering and technology at Youngstown State University.

By his estimate, various family members have been pulled over a total of about 30 times in a matter of months driving through Canfield. They have decided not to file complaints, said Dean, who noted that the city is about 0.25 percent black.

Dean, who went on the annual Sojourn to the Past traveling American history bus journey to several civil rights sites in the Deep South, added he was nervous to attend Sunday’s rally because of its location, but felt “safer in numbers.”

Counterdemonstrators brought signs that read “All Lives Matter,” “100% American, 0% Socialist” and “America — our rights are at risk! Wake up!”

Among the pro-Trump faction were veterans Holly Niotti-Soltesz, Greg Patrick and Debbie Nespeca, who served in the U.S. Navy, Coast Guard and Marines, respectively.

“We love our country and police,” said Niotti-Soltesz, of Canfield. “We’re losing our freedoms, and people need to wake up. We’re all equal in the eyes of God.”

Niotti-Soltesz added that she feels some BLM members act racist by supporting a position that inherently divides one group of people from another. In addition, the organization is funded largely by George Soros, the billionaire investor and philanthropist who’s a longtime supporter of democratic ideals and causes, she continued.

Niotti-Soltesz also praised President Donald Trump for his handling of the five-month health crisis, saying he had the tools in place to fight the pandemic, but some Democrats consistently fought his efforts. He secured needed ventilators and helped fund a hospital in New York City for those with COVID-19, though that facility saw little use, she said, adding that the counterrotesters also are nonviolent, and that they support the flag as well as a law-and-order platform.

Niotti-Soltesz, Nespeca and Patrick also said they feel Trump has done a lot for the black community, including working on prison-reform efforts.

Cohen said a spark for the first BLM protest in late June in Canfield was a racist and bigoted Facebook meme he found highly disturbing. After that rally, a forum took place that included positive dialogue with Canfield Mayor Richard A. Duffett, the school board and police, he noted.

After the rally, Cohen spoke before several Mahoning Valley STTP members conducted an anti-racism workshop, titled “Be a Difference Maker,” which was dedicated to the memory and legacy of the late U.S. Rep. John Lewis.

The longtime Georgia congressman, humanitarian and civil rights leader, who also espoused and lived by the philosophy of nonviolence, died July 17 in Atlanta at age 80.