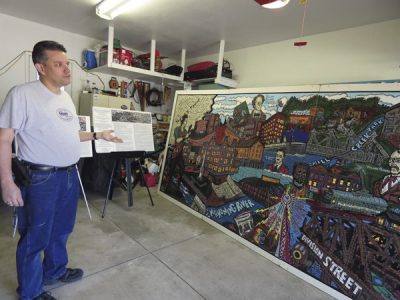 Staff photo / Andy Gray Bob Barko Jr. talks about his “Here in Youngstown” mural. A 42-foot-long vinyl version of the project is planned for West Federal Street in downtown Youngstown.

Boardman High School graduate Bob Barko Jr. grew up in a family of storytellers, who shared with him their memories of life in the Mahoning Valley.

He’s a pretty good storyteller, too. He’ll mimic the voice of the person he’s talking about as part of his animated way of sharing his experiences.

But Barko, 51, tells his best stories through his work.

The graphic artist has created a niche by focusing on pieces that celebrate his community’s past and present, area landmarks such as Mill Creek Park, Idora Park and the downtown Youngstown skyline.

He’s been interested in art as long as he can remember.

“When I was a little kid, I remember dad teaching me to draw corsairs when we lived in Niles,” he said.

The 1987 Boardman High School graduate studied art at Youngstown State University (earning his degree in 1993), and it was during that daily commute to YSU that he first thought about making Youngstown the subject of his work.

“I’d take that (Route) 62, Madison Avenue expressway every day and think, ‘Man, we’ve got a good-looking skyline. Some day I’m going to do that drawing.”

In 1996, when Youngstown was celebrating its bicentennial and President Bill Clinton made a campaign stop in the city, Barko had success selling prints of his skyline piece.

Then Richard Scarsella, who ran the Idora Park Institute, encouraged him to do the first of several pieces inspired by the amusement park destroyed by fire in 1984. Mill Creek Park also is the subject of multiple pieces.

“I always say my artwork begets other artwork,” Barko said. “More than 20 years later, it keeps on truckin’. If it wasn’t for the folks that like my work, I wouldn’t be doing it anymore. I’m blessed over the course of more than 20 years that people have liked what I’ve done.”

His ideas can be seen on the back of vehicles (those black and white Yo stickers) and on Youngstown streets (he’s painted and repainted YSU mascot Pete the Penguin about 200 times on fire hydrants around campus). He operated Steeltown Studios in downtown Youngstown from 2000 until 2012.

One of his biggest projects is “Here in Youngstown,” a multi-panel mural chronicling the city’s history that was created with support from the Junior League of Youngstown and unveiled in 2007.

“That was my first love letter to the city,” Barko said.

As soon as it was unveiled, people started suggesting additional people and events worthy of including, and he added two more panels to the project in 2018.

His next major project will give the mural a more permanent home. Barko is part of Leadership Mahoning Valley’s 2020 class. As a class project, they will create a 42-foot-long and 12-foot-high vinyl version of the mural that will be displayed in the 200 block of West Federal Street in downtown Youngstown in front of the vacant lot between the Wells Building and the old State Theatre.

The top six feet will be the mural — “That way even if there are cars parked there, you’ll be able to see it from the street,” he said — and the bottom six feet will feature the key Barko created that explains the historical significance of each of the 92 images that make up the work.

If and when the vacant lot is developed, the vinyl mural could be moved to a different location. Barko also is working on a piece that will improve the aesthetics of the State Theatre facade. Some of the art for the State is inspired by its ornate theater seats. Barko, a history buff, has a couple of the original seats in his Austintown home.

“Cityscape Youngstown applied for a grant for funding,” he said. “Once they come back with the funding, we’ll be ready to roll.”

Barko hopes the project will be finished for the 20th anniversary of First Night Youngstown on New Year’s Eve.

“This to me represents my gift back to the city,” he said. “To be able to put it downtown on a fairly permanent basis is very exciting to me.”

While art is Barko’s passion, it’s not his only profession. The master technical sergeant is public affairs superintendent at the Youngstown Air Reserve Station in Vienna. He joined the Army National Guard in high school as a way to pay for college. He didn’t re-enlist in 1992, because there wasn’t a way to use his art skills in the military.

In 2000 he was attending a reunion with some of his National Guard colleagues who were part of a battalion out of Austintown. The former battalion commander now was assistant adjutant general for the state, and he offered Barko a job in the public affairs office in Columbus.

“By 2000 I’d been doing the art thing for three or four years, I’d been marketing myself, so I got into it,” he said.

The chance to work closer to home was pure luck. Barko needed to get a new ID and didn’t want to drive three hours to Columbus to get it. He went to the air base to get it and learned about its public affairs office while he was there.

“It took about two years for all the pieces, parts to fall into place, but eventually I transferred up here,” he said, and he became superintendent after his former supervisor took a job in Florida.

He’s been able bring his art to the base — he created a comic book character named Winger that has appeared in publication and turned into an inflatable mascot. His “holy grail” is to create a piece about the work done at the local station that would be worthy of inclusion at the Air Force History Center.

“In my mind, that would be my gift back to the base. I’m so blessed with this job that I fell into accidentally, and before it’s all said and done, I’ll end up with a long career out of it.”