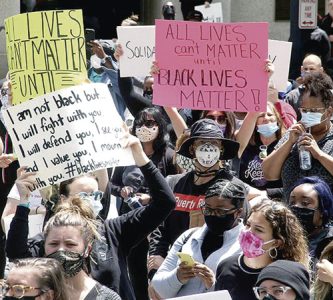 “I shouldn’t have to fear the people who should protect me. I won’t be satisfied until justice rolls …” the Youngstown State University junior and activist said before being overcome with emotion.

Walker was among those who spoke during Sunday’s March for Justice program and rally, which began at Wood Street and Wick Avenue, then proceeded about a half-mile to the Mahoning County Courthouse.

A diverse crowd of more than 1,000 elected officials, community leaders, students, activists and others took part in the 90-minute peaceful gathering, which was largely to honor those whose lives have been lost to violence and bring a greater awareness to what many see as the problem of ongoing police brutality, especially against blacks.

The nonviolent event also was to unify the community to focus on the problem of systemic racism; hold the Youngstown Police Department and community accountable for ensuring all citizens’ safety, especially people of color; encourage the city and the Mahoning Valley to work for social justice and racial equality; and raise further awareness regarding residents’ obligation and power to vote, noted Sonya Lenoir, an Ohio State University student who organized the rally.

“Everybody’s angry, but we must express it the right way,” Lenoir told the crowd before the march began. “We’re here to honor the lives taken.”

“It feels as if we’re talking in circles and getting nothing done,” said Walker, who went on the annual Sojourn to the Past traveling American history bus trip through the Deep South in 2017. “People are angry and tired, and tired of being angry about their sons and daughters being slaughtered! I am getting impatient of begging for people to do their job.”

She also called on people to channel their anger at social injustices and police brutality, especially aimed at minorities, via nonviolent action, as well as exercising their right to vote and refusing to be silent witnesses.

Many participants did so also by shouting in unison the names of several blacks who were killed by police. Some also carried signs that read “No justice, no peace,” “Stop killing black people;” “We declare war on racism;” “Let black people grow old” and “I can’t breathe!” a reference to George Floyd’s plea to Derek Chauvin, the Minneapolis police officer accused of pressing his knee on Floyd’s neck for nearly nine minutes in an incident that was captured on video last Monday.

In addition, it’s imperative that people use their power to vote and hold their elected officials accountable for representing all of their constituents, Oliver added.

The Rev. Joseph Boyd, pastor of the Unitarian Universalist Church of Youngstown, read aloud the names of some area blacks killed in recent high-profile police shootings. They included Floyd as well as Tamir Rice, 12, who had a toy gun before a Cleveland police officer shot him to death in November 2014, and Matthew Burroughs, 35, whom Niles police shot to death Jan. 2, 2019, outside of his apartment complex.

“In a nation dedicated to the preservation of liberty, we’re seeing the opposite,” Boyd said.

“Too many blacks are afraid of their own government,” added U.S. Rep. Tim Ryan, D-Niles. “We’ve had enough violence in the U.S., enough anger in the U.S. and enough fear in the U.S. It’s time for hope. It’s time to fix our broken economic system and health care system.”

Adding to the challenge of achieving those goals is that some people have a financial interest in wanting to work toward dividing others, Ryan said.

Monica Jones, principal of Youngstown Rayen Early College, implored young people to be empowered to speak out against our “epidemic of racism.”

“You are called to lead us in the next level of change. Smash the status quo,” she said.

Mayor Jamael Tito Brown told the crowd that early on, he coached his son on how to handle a possible traffic stop. He was taught to be respectful and kind to the officer, Brown said.

Patty Mabry of Youngstown, one of the marchers, said her grandson is a local police officer who has received backlash from some people who are angry with “what he represents in his uniform.” Nevertheless, he is dedicated to protecting and serving his community, Mabry added.

Joining her on the march was Beverly Warren, also of Youngstown, who said she feels that all lives matter. Her reason for participating was as simple as it was straightforward.

“I’d like to see that everybody’s treated equally,” she said. 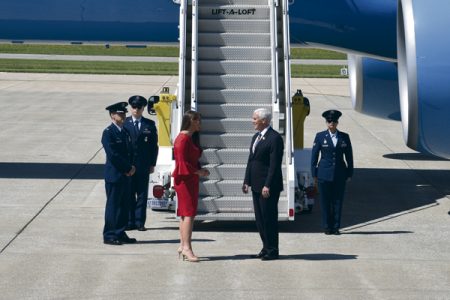