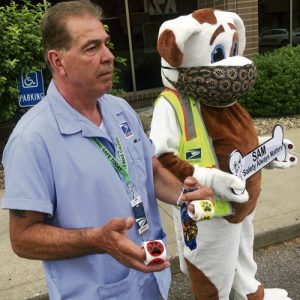 Ralph Girardi, a postal service safety intern, holds colored stickers to be placed on area mailboxes where dogs are in the immediate area. At his right is SAM, the mascot for the postal service’s Safety Always Matters campaign during National Dog Bite Prevention Week this week. The two took part in a news conference Monday at the downtown Youngstown Post Office. Correspondent photo / Sean Barron

YOUNGSTOWN — Many area residents will soon notice colored paw-shaped stickers on their mailboxes.

“We rolled out the program in Youngstown and saw that we got pretty good feedback,” said Mark Rivera, a postal service safety intern. “Dog bites are one of the most serious problems carriers face.”

The effort is part of the U.S. Postal Service’s National Dog Bite Prevention Week, which runs through Saturday and is themed “Be Alert: Prevent the Bite.”

An estimated 5,800 carriers nationwide suffered dog attacks in 2019, according to the USPS.

Orange stickers will be placed on mailboxes at residences in which a potentially dangerous dog lives; yellow ones will appear on mailboxes at homes next to where such a dog is. Both will alert carriers to proceed more cautiously, Rivera noted.

Post cards have been sent to residents to explain the program, said Rivera, who added that last year, about half of the carriers on Youngstown’s 86 postal routes have dealt with some type of dog incident.

He also recalled a mail carrier in Warren who tripped and struck his head on pavement while trying to get away from a vicious dog. The carrier lost valuable worktime, Rivera continued.

“We have a great relationship with the dog warden,” Girardi said, adding the warden helps to keep carriers safe.

Also accompanying Rivera and Girardi at Monday’s news conference was Safety SAM (Safety Always Matters). The mascot will make appearances in the community, especially at schools, to instruct children on the importance of keeping the front door closed when a carrier arrives until the dog is secure and not accepting mail when a pet is present, Rivera explained.

“Even the most friendly dogs can bite,” he warned. “The best way to prevent dog bites is prevention.”

Other options for ensuring carriers’ safety is to have residents with a dangerous dog pick up their mail at the post office, as well as suspending mail indefinitely, said Rivera, who added that dog attacks can also leave emotional scars on carriers.

• To prevent dog bites when carriers deliver mail, residents should keep pets indoors in a closed room, away from the door or on a leash. Dogs have been known to break through screens and plate-glass windows.

• Parents should remind children not to accept mail in a dog’s presence, because the animal could interpret such action as a threat, and its

natural instinct is to protect the family.

• Residents should refrain from having dogs roam outside of the home without a leash.

• Socializing a dog to become used to a variety of situations and people is vital. Animals that receive scant attention or handling, are tied up for long periods of time and aren’t properly trained are more likely to bite.

• Spaying and neutering a dog can be beneficial, because neutered pets are less likely to attack.