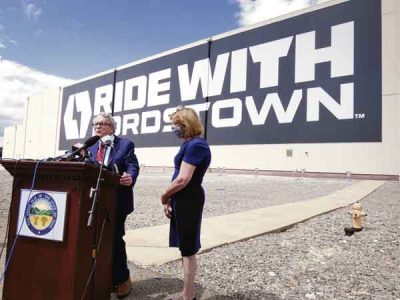 Staff photo / Ron Selak Jr. Ohio Gov. Mike DeWine and his wife, Fran, stand outside the Lordstown Motors Corp. headquarters at the former General Motors plant on Wednesday. DeWine and Lt. Gov. Jon Husted toured the plant and got an early look at the Endurance, the all-electric pickup truck that will be introduced to the public today. DeWine said he and his wife wanted to stay away from the expected crowd at the plant today because of social-distancing concerns.

“This is an exciting day for the state of Ohio,” DeWine, a Republican, said. “We just got a good look at the future and I think when you see the pickup … everyone is going to be very, very excited about it.

“This is a really important day for the Mahoning Valley and for the state of Ohio,” DeWine said.

He and Lt. Gov. Jon Husted toured the facility, the former General Motors assembly plant, met with company officials and got an early glimpse of the Endurance.

“The truck is just very promising and the technology on this really can be a game changer in electric propulsion and give them a great opportunity to be aggressive to get into the market and serve customers right out of the box,” Husted said. “And for us the great news is it’s going to happen in Ohio.”

Today, Vice President Mike Pence and U.S. Energy Secretary Dan Brouillette will attend the highly anticipated reveal. Pence is scheduled to make remarks inside the plant. DeWine, who was accompanied by his wife, Fran, and Husted decided to visit the plant a day early to avoid the large crowd amid the viral outbreak.

“Quite frankly, Fran and I have not been around crowds and we’re not intending to do that. We have been very, very careful,” said DeWine, adding he spoke with Pence on Wednesday to relay his appreciation of his being in attendance.

Today’s event will be livestreamed on the company’s YouTube channel, https://www.youtube.com/lordstownmotors.

Helping to propel Lordstown Motors at this quick pace — it bought the plant from GM in November and plans to launch production in early 2021 — was GM’s care of the facility and selling it whole, including equipment, to Lordstown Motors.

“This is absolutely amazing how fast this is happening,” DeWine said. “I know for people in the Mahoning Valley it does not seem like it is happening fast enough, but to think how fast this has emerged … it’s absolutely phenomenal. To come from zero to 120 in a very, very short period of time, I find frankly amazing.”

Steve Burns, Lordstown Motors CEO, took a few questions from the media Wednesday, on work happening there now, its present and future workforce and whether he would ask Pence to wear a mask.

Burns said masks would be given to everyone who comes in and when pressed, said, “I would never presume to require the vice president to do anything.”

The company has about 70 employees, and about 100 contractors are working at the plant, most of them engineers working to retool it to make the battery-powered truck.

“As we get closer to production, we will start to hire line workers and train them how to build electric vehicles,” Burns said.

Production is scheduled to begin in early 2021.

Burns anticipates the first wave of employees will include 400 line workers, 100 more each in the battery and motor plants, and 300 to 400 engineers. Elaphe Propulsion Technologies in Slovenia will manufacture the Endurance’s in-wheel motor at the plant in Lordstown. The company hasn’t announced the battery provider.

“A lot of people ask me what is the end game,” Burns said. “This plant was built for one purpose — volume production of automobiles.”

General Motors was manufacturing Chevrolet Cruzes at about 400,000 a year. Burns said he hopes to eclipse that and employ 5,000 when the plant is at full production.

The Ohio Department of Health reported a one-day increase of 1,150 COVID-19 cases statewide on Thursday, ...