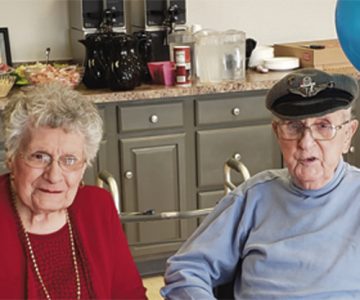 AUSTINTOWN — The capacity in which Staff Sgt. Raymond D. Popovich long ago served our nation was decided by 1 inch.

“When you joined, you had to be 5 feet, 6 inches tall. I was 5 feet, 5 inches, so I couldn’t go into the Navy. So I had a choice, so I said I would go to the Army Air Corps,” remembered Popovich, 100, a World War II veteran who served four years in that military branch, which later became the U.S. Air Force.

In early 1941, the Austintown man enlisted, then was stationed at Maxwell Field, later Maxwell Air Force Base, near Montgomery, Ala. Much of his military career was spent in Foggia, Italy, where he flew on hundreds of missions aboard a Boeing B-17 Flying Fortress as part of the 463rd Bomb Group. He served as a waist gunner, bombardier and turret gunner.

During his time in the air, the seasoned gunner preferred to conduct bombing raids over open country instead of more populous cities to minimize the number of possible casualties, said Popovich, who also recalled having excelled at skeet shooting and becoming an expert marksman.

Despite his propensity for consistently hitting targets that were mechanically and rapidly flung into the air at different angles, “I never shot a shotgun,” Popovich told his incredulous instructor.

Leading the 463rd crew on flying missions was the 332nd Tuskegee Red Tails, an all-black squadron that was part of the Tuskegee Airmen and who also led the raids while most commonly flying in the North American P-51 Mustang, a long-range, single-seat fighter bomber. He also remembered Lt. Col. Alexander Jefferson, one of the pilots who guided Popovich’s crew.

Popovich recalled that even with the protection the 332nd members provided, he dealt with a few close calls during his air travels.

In one instance, the pilot apparently had accidentally sat on an oxygen line, depriving the cockpit of ample air. On a whim, the co-pilot took over the controls and sent the plane on a hard right turn but was able to right it, he recalled.

“Everybody got all discombobulated,” Popovich said. “We didn’t know what the hell was happening.”

On another occasion, Popovich was preparing to release a bomb from the back of the plane, but noticed a crew member standing next to the large explosive device with one foot on it, evidently to brace himself. After a stern warning from Popovich, the man stepped out of the way just before the bomb was dropped.

A less dramatic close call came shortly after Popovich took off and realized he had accidentally left his oxygen mask in his tent. He jumped from the plane, ran to retrieve the mask and returned to his plane that had landed just in time before it took off again, he remembered.

Undoubtedly, Popovich felt considerably more grounded after the war, especially when he began a few years later what became a 32-year career as a dispatcher in Republic Steel Co.’s electric-weld pipe mill, which specialized in making galvanized pipe, before he retired in 1983.

At one point, Popovich had amassed 10 weeks of vacation time, part of which he used to take his wife and six young children on a 30-day cross-country camping trip in the family’s station wagon. They made it as far as California, recalled Popovich’s wife, Phyllis.

In addition to taking his family on that and many other travels, Popovich has made it a point to stay in touch with some of those he served with decades earlier. Several years ago, he reunited with a member of his crew who lived in Medina.

In 2016, the expert gunner and bombardier was invited to a 75th anniversary gala of the 332nd Tuskegee Red Tails in Detroit. The occasion was extra special because he met some of the men for the first time, including Jefferson.

Popovich’s most recent trip was when he took two of his daughters to Washington, D.C., to see the National World War II Air Force Museum. Their timing also coincided with the day it opened, Phyllis noted.

On a few occasions long after his service, Popovich, who also enjoyed gardening and playing golf, found himself in somewhat familiar territory: aboard a B-17, though a different model. On one of those times, he flew to California in such a plane, his wife said.

“He liked that more than flying commercial,” Phyllis said with laughter.