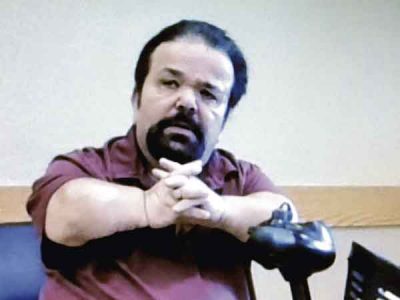 Staff photo / Andy Gray Gary Friedkin talks about his career as an actor during a Zoom interview earlier this month.

Gary Friedkin wanted to be a drummer.

He ended up being an Ewok, a futuristic biker, a ’50s diner cook and a young doctor in love — all within a couple years of each other.

The Rayen High School and Youngstown State University graduate spent nearly 40 years in southern California, working as an actor when there was work and a mortgage broker when there wasn’t. Before moving to Niles a dozen years ago, he ended up being a part of some of the most successful and influential films of the 1980s.

It was a high-profile flop that launched his career.

After getting his accounting degree at YSU, Friedkin made his first trip to California, primarily to pursue music. His acting break came while attending a little people’s convention, where he was approached by a producer working on a film that was very, very loosely based on the making of “The Wizard of Oz.” His height is listed as 4 foot even.

Friedkin, 67, landed one of the seven major roles for little people in a film starring Chevy Chase, who successfully transitioned from “Saturday Night Live” to movies with hits like “Foul Play” and “Caddyshack,” and Carrie Fisher, who already had played Princess Leia twice in “Star Wars” and “The Empire Strikes Back.”

“Under the Rainbow” was a commercial and critical bomb, but it got Friedkin in the actor’s union and taught him about the business, both what to do and what not to do.

What was supposed to be a six-week job ended up being four months of work, in part because Fisher’s drug problem shut down production more than once.

“Know your lines and you don’t forget them,” Friedkin said. “It costs hundreds of thousands of dollars a day (on set). They can’t have you screwing around. You have to be very professional about it.”

Garry Marshall, who created such shows as “Happy Days,” “Laverne and Shirley” and “Mork & Mindy,” gave Friedkin a prominent role in his feature directing debut, a soap opera / hospital spoof called “Young Doctors in Love” (go to YouTube and type in “Young Doctors in Love telephone” to see one of Friedkin’s most memorable bits from the comedy).

“They would hire the best caterers — lobster, filet, all the high-end food that you’d get in any fine restaurant,” Friedkin said. “They’re constantly feeding you because they want to keep you going on the set for 12 hours.”

“Young Doctors” led to a three-episode run on “Happy Days” as a cook at Arnold’s drive-in restaurant, and he also appeared in Marshall’s final film, the 2016 ensemble comedy-drama “Mother’s Day.”

Friedkin got to beat up Harrison Ford as part of a biker gang in “Blade Runner” and was an Ewok in the third “Star Wars” film “Return of the Jedi,” both big movies, but not easy work. It was cold and rainy when he shot his scenes for “Blade Runner” and more than 100 degrees inside that furry Ewok suit.

“It wasn’t all bright lights and limousines,” Friedkin said.

He can be seen in many movies and television shows, but he also did work as a stand-in, filling in on set for child actors when the crew was making technical adjustments. Friedkin said a stand-in for a child lead in a movie could make between $1,500 and $2,000 a week with overtime.

People on the set always were respectful and treated him well, but Friedkin would turn down roles that treated little people as freaks or in demeaning ways.

“I wouldn’t do anything I thought was derogatory,” he said. “I wouldn’t go near it.”

A common side effect of the kind of dwarfism Friedkin has is spinal stenosis and other back problems. Friedkin had the first of 17 back surgeries in 1993. When he was recuperating from surgery or when acting jobs weren’t available, he worked as an independent mortgage broker, which paid well and gave him the flexibility to continue acting.

It became less lucrative after the housing market collapsed in 2007-08. The increasing number of surgeries and the cost of living in California led Friedkin to move back to Ohio and living in Niles.

The 17th back surgery was unsuccessful. Friedkin now is in a wheelchair and lives at Heritage Manor Rehabilitation and Retirement Community on the Youngstown / Liberty border. With nursing homes on lockdown due to the COVID-19 pandemic, Friedkin did the interview for this story via Zoom videoconference.

He said what he misses most about acting is hanging out with the other performers particularly on a film like “Young Doctors,” which featured several actors who had long, successful careers, including Michael McKean, Dabney Coleman, Michael Richards and Harry Dean Stanton.

“There’s a lot of downtime when you’re shooting a movie, everyone’s telling stories. The camaraderie on that one was great.”