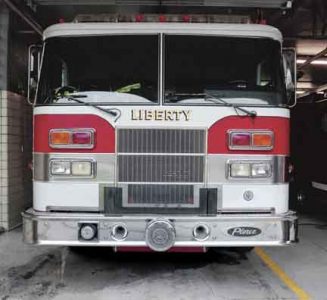 LIBERTY — A police investigation triggered by last month’s suspicious death of a Liberty firefighter uncovered an apparent prescription-drug trading ring within the Liberty Fire Department, according to records released Thursday by township officials.

The revelations led to Wednesday’s dismissal of two fire lieutenants, the forced retirement of a fire captain and the demotion of a captain inspector. A local task force is determining whether criminal charges should be filed.

According to documents compiled following a Liberty Township police investigation, Lt. Josh Cleland, Lt. Justin Graham and Capt. Chris Olson were found to be in violation of several Liberty Township Fire Department policies and Ohio laws. They were discharged from their positions.

Trustees on Wednesday accepted the resignations of the two lieutenants, effective immediately, and to authorize Trustee Chairman Greg Cizmar to sign the separation agreements on behalf of the township.

The board also accepted the retirement and separation agreement with Olson, effective Thursday.

Trustees demoted Capt. Inspector Cathy Macchione to captain. According to law director Cherry Poteet, this demotion could be made with no appeal because she was in her six-month probationary period for her inspector duties. Macchione was placed on administrative leave, Poteet said, as officials are determining any charges or proposed discipline.

Police Capt. Ray Buhala and Detectives Sgt. Mike Shuster and G.T. Bednar produced a 22-page document. It was released Thursday by Poteet, following a public records request, and details the alleged prescription-drug trading ring within the fire department that came to light following the death of John Beard on April 12.

The report showed Beard was taken to St. Elizabeth Youngstown Hospital about 9:15 p.m. April 11 after Vienna Fire Department personnel responded to a call at 40 S. Outer Drive NE for an unresponsive male.

The first responders, which included two medics, a Vienna police officer and a volunteer firefighter, identified the unresponsive male as Beard. According to the medic’s report, the woman who was with Beard was suspected of being under the influence of heroin.

An initial assessment of Beard led medics to administer Narcan both through the nose and through IV. When Beard responded in the ambulance, Beard asked the medic to “give me two more up the nose, and I’ll be fine.”

Beard told medics as they were en route to the hospital that his father had just passed away, and “he made a really stupid decision.”

Beard was taken to the hospital emergency room. In the meantime, Liberty fire Capt. Chris Olson was alerted to the incident. He told the first responders of Beard’s heart condition and any medications he may be taking. Olson then called Liberty fire Lt. Justin Graham, who was on-duty at the time to alert him of the events surrounding Beard. Graham asked his supervisor for permission to respond to the hospital to check on their colleague.

Graham met Olson at the emergency entrance and the two went to Beard’s room. Beard told them he thought he was taking cocaine, “but it apparently ended up being heroin,” the report states.

Graham gave conflicting stories about Beard to colleagues, the report states, telling one colleague he had a bad reaction to erectile dysfunction medication and to his superior that Beard was hospitalized for a panic attack.

The fire lieutenant later told investigators he did not think he had any obligation to tell anyone because it happened when Beard was off duty.

Olson, meanwhile, stayed with Beard at the hospital until his discharge. They learned the woman from the Vienna home also was hospitalized for an overdose.

The doctor, in discharging Beard, ordered him to have someone in his home monitoring him for the next 24 hours. Olson later told investigators he did not hear any specific doctor’s orders for Beard.

Olson then retrieved the house keys for the Vienna home and then drove Beard there to pick up his overnight bag and truck. As they got back to the Vienna trailer, Beard said he felt “a little like I’m drunk” and he “had no energy.” Before leaving the trailer, the report states Beard threw up in the kitchen sink.

Olson allowed Beard to start driving his truck toward his McDonald home shortly after 11:30 p.m. Olson followed in his vehicle when Beard pulled over about 2 miles into the trip at Yankee Kitchen, off state Route 193. Beard told Olson he didn’t feel safe driving, according to the report.

Olson then left his vehicle at the restaurant parking lot and drove Beard in his truck to his McDonald home. At Beard’s house, Olson stayed only a few minutes, with Beard telling him he felt he was going to get sick again. The fire captain left Beard standing by the kitchen sink.

Olson told investigators he does not like being around people who are vomiting as it makes him feel like he is going to vomit.

About 12:30 a.m. April 12, Olson and his wife — who was called to come pick him up — left Beard’s house and drove back to Yankee Kitchen to get Olson’s vehicle. Olson told investigators he did not check on or call Beard again.

According to the report, Liberty fire Chief Gus Birch learned later the morning of April 12 that a welfare check was being conducted at Beard’s 424 Pennsylvania Ave., McDonald home because the firefighter did not report for his 7 a.m. shift. Investigators stated that Graham also had texted Beard and was not getting a response.

An off-duty, part-time Liberty firefighter then went to the home, but her knocks on the front door went unanswered.

McDonald police and Girard paramedics were summoned. After a spare key was found to the back door, first responders found Beard unresponsive on a bed in a second-floor room.

Birch told investigators he learned that an ambulance was called to Beard’s home and then shortly thereafter, another frantic call came that Beard had died.

After being informed about Beard’s drug overdose, Birch confronted those involved in the events leading up to Beard’s death. It was during these meetings the chief also learned of rumors of a “shift” of firefighter / medics who have been sharing pills, the investigators wrote.

Birch told investigators he spent the day of Beard’s death collecting information about the events of April 11. He said he contacted township Administrator Martha Weirick about how to respond to these circumstances.

In a meeting with the chief, Olson admitted he concocted the “panic attack” story because he thought he didn’t need to report Beard’s drug use because he was off duty.

An extraction of information from Beard’s iPad revealed messages between Graham and Beard the night of April 11 in which they talked about the cover story hiding Beard’s drug use.

Weirick told investigators she learned on April 13 that Beard’s death may have been the result of an overdose. It also was at this meeting with Birch that she learned of the rumors of fire department personnel passing pills among each other.

Other texts extracted from Beard’s iPad also reveal firefighters attempting to conceal their illicit activities by masking the drugs common names with their own “slang terminology. They used “Uncle” or “Purples” to refer to Zenzedi an amphetamine to treat ADHD; “Aunt” to refer to Xanax, an anxiety drug; “Cousin” for the painkiller opioid Percocet; “orange” for the painkiller opioid Nucynta and “smurf berries” to mask the anxiety drug Klonopin. The texts also reference the exchange of the narcotic Vicodin.

These “smurf berries” referred to Macchione’s prescription for Klonopin, the report states.

In her interview with investigators, Macchione stated she only vaguely remembered text messages about “smurf berries” but denied ever sharing or receiving medication from another firefighter. She told investigators she was not aware of sharing of pills within the department.