BOARDMAN — Security footage is being reviewed after the report of a robbery inside Speedway.

Police say at 8:59 p.m. Friday a call was received from employees at the convenient store, 649 E. Midlothian Blvd., alleging a man held them at gunpoint and demanded money from the cash registers. Nearly $500 was taken, according to police.

The robber approached the registers and asked for a pack of cigarettes. When an employee turned to get them, the robber pulled a gun and pointed it at the employee’s back, the police report states.

When the robber grabbed the cash from employees, he also snatched away a clear partition, breaking it on the ground, the report states.

The man drove away, first in a Jeep, then a pickup truck, according to neighbors in the vicinity.

By ANDY GRAY Staff writer One of the women who shared her claims of sexual assault as a teenager while ...

STRUTHERS — A Struthers judge is reaching out to city council in hopes of resolving structural issues in the ...

GIRARD — Residents of Ward and Forsythe avenues are asking for help from city officials in dealing with a group ... 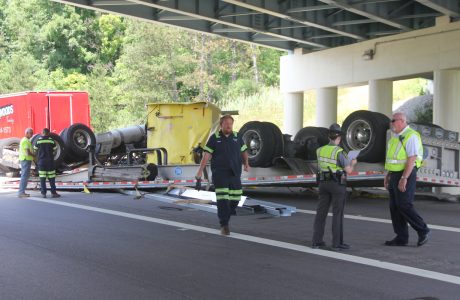 Semi truck turns over on Route 11

AUSTINTOWN — The State Controlling Board awarded $500,000 for programs and improvements to the former Youngstown ...

YOUNGSTOWN — The Youngstown Board of Education plans to place a renewal operating levy on the Nov. 3 ballot ...