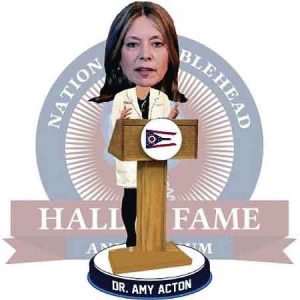 Submitted photo A bobblehead figurine of Liberty High School graduate and Ohio Health Director Dr. Amy Acton stands behind a podium as the real Acton does when delivering daily COVID-19 updates. The National Bobblehead Hall of Fame and Museum is selling the bobblehead to raise money for the Protect The Heroes fund in support of the 100 Million Mask Challenge.

The bobblehead is the first of the Buckeye State’s top public health official, who was called “the real MVP of Ohio’s coronavirus response” by Ohio House Minority Leader Emilia Sykes and “Ohio’s trusted face during the pandemic” by the Dayton Daily News.

The Milwaukee-based National Bobblehead Hall of Fame and Museum will donate $5 from every Dr. Acton Bobblehead sold to the Protect The Heroes fund in support of the 100 Million Mask Challenge. This is the same cause for which the museum has raised more than $175,000 through the sale of bobbleheads featuring Dr. Anthony Fauci, Dr. Deborah Birx and four United States governors, including Ohio Gov. Mike DeWine.

The Dr. Amy Acton bobbleheads are only available through the museum’s online store. They are $25 each plus a flat-rate shipping charge of $8 per order and will ship in July. On a base bearing her name, the bobblehead features Acton wearing a white lab coat and standing at a podium adorned with the state flag as she makes an announcement during a press briefing. The bobblehead of Acton joins the bobblehead of DeWine, which was released last week.

Determined to have the right person in charge during a crisis, DeWine made Acton his final cabinet pick as director of the Department of Health after a lengthy search process in February 2019. The first woman to occupy the post, Acton previously taught at The Ohio State University as an associate professor of public health. She also worked at the Columbus Foundation as a grants manager and was the director of Project LOVE (Love Our kids, Vaccinate Early).

In response to the coronavirus pandemic, CNN referred to Acton as “the Buckeye State’s version of the straight-talking Dr. Anthony Fauci.”

Acton advised DeWine, who became the first governor in the nation to shut down schools and limit gatherings to no more than 100 people, despite the fact that Ohio had only three confirmed cases at the time.

Ohio was also the first state to shut down bars and restaurants when it had fewer than 40 confirmed cases. In addition, Acton was instrumental in the decision to postpone Ohio’s 2020 primary election, which was slated for March 17.

Acton predicted in early March that the COVID-19 outbreak will “be the thing this generation remembers,” much like previous generations remember the assassination of JFK, the Challenger explosion and the Sept. 11, 2001, terrorist attacks.

“Bobbleheads are the ultimate honor, and we think Dr. Acton deserves it given what she has done and continues to do for the state of Ohio and the country in the battle against COVID-19,” National Bobblehead Hall of Fame and Museum co-founder and CEO Phil Sklar said.

“After releasing the bobblehead of Gov. DeWine, we received a lot of requests for a bobblehead of Dr. Acton, who has been instrumental in the continued fight against the coronavirus.”