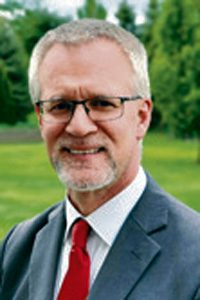 CANFIELD — A new superintendent for the Canfield Local School District has been selected.

Joseph Knoll, superintendent of the Marlington school district in Stark County, was announced as the new administrative leader by board members Friday afternoon.

“I’m just extremely excited about the opportunity to come to Canfield,” Knoll said by telephone Friday.

Combining his past experiences with the interview process for his new role, he said he’s been met with positivity along the way.

“I know the community, I know the passions of the schools,” along with various opportunities for the school district, Knoll said.

Knoll is succeeding John Tullio, who was named interim superintendent in December after Alex Geordan resigned amid controversy regarding his handling of a police incident.

A three-year contract was offered to Knoll, and is expected to be approved at the Canfield Board of Education meeting at 6 p.m. Tuesday.

His resume, which includes introducing technology-related ideas to the Marlington school district, will benefit his new district moving forward, board members said. Within the first 100 days, Knoll said he will work on communication, which is his top priority.

“I take a lot of pride in trying to build relationships and making connections,” he said.

As fast as he can, sometimes remotely, Knoll wants to begin building those community relationships with discussions and introductions, starting with staff in the school system, as well as police, fire and community groups, he said.

“We chose Mr. Knoll for his extensive educational administrative experience, his commitment to innovation and his outstanding skills in communication and relationship- building,” said David Wilkeson, board president.

Candidates vying for the position were interviewed by a 15-member stakeholder group, while board members conducted two rounds of interviews with final candidates.

Knoll has been married to his wife, Jennifer, for 21 years, and they have two children, Addyson, 19, and 16-year-old Andrew. During last week’s candidate forum, Knoll spoke about his son, who has special needs.

Because he applies what he learns at home to a school setting, Knoll shared during the virtual event that parents at Marlington schools have felt comfortable reaching out to him, asking questions if they have a special- needs student.

Knoll said enjoys being outdoors when he can.

“When there is some downtime in the Knoll household, I enjoy fishing and playing golf,” he said.