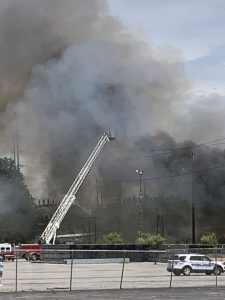 Staff photo / Guy Vogrin Smoke was visible from a long distance after a storage facility on Henricks Road in Austintown caught fire Wednesday afternoon. A tractor-trailer making a delivery accidentally pulled down live wires, which started the fire.

Firefighters were called to a building on Henricks Road, owned by Youngstown-based Vinylume Products Inc., around 12:30 p.m.

Downed wires set fire to three roughly 6,000-square-foot storage units filled with manufacturing material and products, including metal shelving units. The storage units were rented to another business, according to reports.

“They just lit up,” Frost said.

Frost said firefighters could see the smoke from the fire station on state Route 46. Firefighters had the blaze under control but remained on the scene throughout the afternoon.

No one was hurt, and Frost said he does not expect any charges to be filed.

New COVID-19 cases reported in each of the last seven consecutive days have ranked among the state’s all-time ...

Staff report YOUNGSTOWN — Children who were hit by gunfire about 8 p.m. Monday near the 900 block of Franklin ...

WARREN — The number of inmates at the Trumbull Correctional Institution in Leavittsburg testing positive for ...