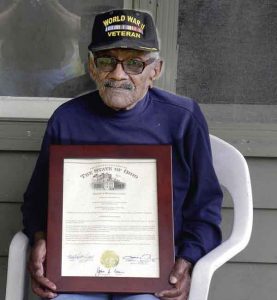 Morris, who grew up on Youngstown’s south side, went to Oak Street School, Lincoln School and East High School, where he dropped out after his sophomore year was completed.

He began his basic training at Fort Eustis in Newport News, Va. After a quick four weeks of boot camp, he was shipped off to Hawaii and then on to Saipan Island.

Morris was in the 7th Transportation Brigade which was known as “the most deployed unit in the Army,” he said.

He trained to drive a “deuce-and-a-half truck,” military slang for a 2-1/2 ton, two-axle truck.

“We used it to transport fuel to the landing strips for airplanes, and to carry bodies back for identification,” Morris said.

Picking up the deceased was the task that Morris was mostly assigned to. He said it was tough, but it had to be done.

After World War II, Morris stayed in the Army, rose to the rank of sergeant, and was sent to France for a short time. He said his time in France gave him his happiest memories of Army life.

“It was fun, we got to spend time in the towns, even though it was a little dangerous,” Morris said. “We visited the Eiffel Tower, but I told my buddies I would only go to the first floor and that was it. I would love to go back to France today as a civilian.”

Morris spent two years in France before being deployed in 1950 to an island near Guam that was liberated. The 7th was then sent to Pusan, Korea where he was once again tasked with gathering the bodies of deceased soldiers.

In 1952, Morris was sent to Germany where he stayed until 1966. In Germany, he worked in ordnance supply, then went back into transportation when he was sent to Vietnam.

“That is when things got scary,” he said. “The Viet Cong built underground passages and after we would pass by, they would start shooting at us.”

Morris didn’t know if he would make it back home.

“All you saw was death everywhere,” Morris said.

In 1969, he put in for full retirement and was sent back home on a flight that landed in California. But the real shocker was yet to come.

“When I got off the plane, people were spitting on us and calling us baby killers,” Morris said. “I said, ‘Do you mean we put our lives on the line for these people and this is how they treat us?’ The worse part of serving my country was coming home.”

Upon returning to Ohio, Morris settled in Boardman and got a job driving bus for the Western Reserve Transit Authority. He also drove a tour bus and a school bus for Youngstown City Schools.

Today he enjoys his Boardman home and a patriotic statue that sits in his front yard. When he bought the house 11 years ago, a friend dropped off a saluting Army soldier statue. Morris placed it in the front yard saluting the American flag on his front porch.

Morris still thinks the Army is a good place for a young person.

“I tell them, ‘The Army is a good thing. IIt has a lot of opportunities. Just follow the rules and you’ll be OK.'”