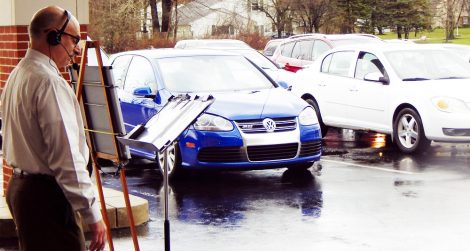 The Rev. Kenneth Gifford, pastor of Poland United Methodist Church, speaks to members of the church and guests in their cars as part of the new drive-in worship service that takes place 10 a.m. Sunday mornings.

Whether broadcasting a service or Mass live on social media, standing in a church parking lot with a microphone or handing out bags of communion wafers ahead of time to allow for participating at home are just some of the adjustments local churches have made for social distancing.

At Poland United Methodist Church, the Rev. Kenneth Gifford has created a new way to worship together while staying apart, with a “drive-in” worship in the church parking lot.

He said he stands at the front of the parking lot and gives the worship and prayer while people stay in their cars listening on FM Channel 88 on the radio.

The church uses a transmitter to broadcast its service across an FM radio frequency, reaching about 35 cars in its parking lot at a distance of about 200 feet.

“I speak into the microphone, and people can listen to me in their cars in the church parking lot,” Gifford said, noting in addition to the sermon and prayers, he also plays music.

The drive-in worship will continue each Sunday at 10 a.m. until the coronavirus diminishes.

“This was like having a drive-in in the parking lot but with no movie screen. We were able to lift spirits Sunday morning while keeping everyone apart and safe,” he said.

Gifford said the church also broadcasts on Facebook during the week, but many of the older church members are not on social media.

Msgr. John Zuraw, chancellor for the Diocese of Youngstown and pastor at St. Rose Parish in Girard, said he, Msgr. Robert Siffrin, pastor of St. Edward Parish in Youngstown, and Msgr. Leo Wehrlin of St. Christine Parish in Youngstown, all were live streamed on WFMJ-TV 21 on Sunday. Siffrin’s Mass was streamed from St. Columba Cathedral, where he is filling in for Msgr. Peter Polando, who is on a medical leave of absence.

Zuraw said he and Wehrlin will broadcast their Masses at 9 a.m. and Siffrin at 10:30 a.m. each week and allow people to still have some connectedness with the parish.

“We were able to celebrate Mass and gave a homily live. That was the trial week to see how it would work. Since 99 percent of the people at the parishes have cable television, they would be able to watch the Masses. We will continue doing this as long as we need,” Zuraw said.

He said most of the parishes have the capability to live stream and broadcast the celebration of Mass. Zuraw said all the parishes have websites that offer words of encouragement to those who are stuck at home.

“Mass is a very important part of people’s lives. People are used to coming together at church and interacting with the priests and others. They are isolated. There is fear and concern. People are uneasy. This is not normal. If they can view a Mass live or on cable television, they can still have some comfort watching and being part that way,” he said.

Zuraw said there are a variety of opportunities to view broadcast Masses.

He said the Diocese has Catholic Television Network of Youngstown broadcasting Masses 6 a.m. Sunday and also 7 p,m. Saturday from the Basilica of the National Shrine in Washington. He said there are also Masses in Spanish for Hispanic viewers.

In addition, Masses are broadcast on the Ecumenical Channel.

Zuraw said the situation is most interesting in the unique ways different denominations are working to have their services and Masses viewed.

“I think it is interesting that people are using a variety of different approaches to reach their congregations. We are all coming together in many unique ways to worship God,” Zuraw said.

“I stand by the church door and people drive under the carport. I hand them a bag of communion wafers and palm strands since we will probably not be here for Palm Sunday,” he said.

Quaintance said it is important at this time to keep people as connected with church as possible. They can watch him livestreamed on Facebook and everyone can take communion together during Lent.

Church members could pick the items up this week and take part watching the services live streamed each Sunday morning at 11 a.m. All services, events and classes are in virtual reality for April. Wednesday Lenten services at 7 p.m. as well as a Sunday service at 10 a.m. are being streamed live via Facebook with links posted on the Facebook page and website for viewing.

“We don’t want anyone to feel isolated or alone. We are posting the sermon and short videoes with messages during the week so that there is some sense of togetherness,” he said.

He said he, the music minister and others share the message each week to reach the church congregation.

At the Salvation Army in Trumbull County, Captains Kiley and Chris Williams are taking turns delivering the Sunday sermon while being streamed live for Facebook viewing. A camera on a tripod or a handheld camera captures the sermons.

Kiley Williams said the first week’s service on March 22 was from the territorial commander out of New York and for the upcoming Sundays will be either her or her husband preaching.

“People can sit at the computer and watch. We will be at the podium in the sanctuary or at our desk. I have seen people at different Salvation Armies preaching live in their sanctuaries,” she said.

Also during the week, Williams said she shares thoughts of encouragement to help people all the time.

“We want to offer them encouragement when they cannot get out of the house,” she said.

At the Unity Spiritual Centre in Liberty, all worship and prayer services and ministry are now remote.

Pastor Cay Tomerlin said she encourages everyone “to be patient with the changes in the world as we come together in the spirit of oneness while in the midst of our physical separation.”

“We are honored to support the world with prayer during this challenging time. We’ve set up many of our beloved prayer associates to pray and hold 24/7 prayer vigil from their homes,” she said.

Tomerlin said all services, events and classes will move into virtual reality for April. All services will be live streamed on Sunday mornings at 11 a.m.

Tomerlin said she has also set up and volunteered to open an online video chat room each Sunday morning after the virtual service at 12:10 p.m. An online prayer vigil is also available at unityprayervigil.org.