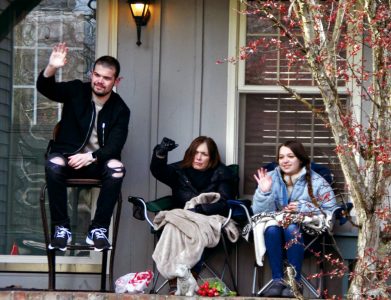 Joey Jr., Tina and Jenna Bonarigo wave to passers-by Thursday afternoon as a moving memorial was organized to show support after the family’s patriarch, Joe Sr., died after being diagnosed with COVID-19. Staff photo / Ashley Fox

POLAND — Looking back on her life with her husband, Tina Bonarigo has no regrets.

“The time we had together, we spent together,” Tina said of her marriage with Joe.

Tina and Joe met when they were both 13, in seventh grade.

“We immediately became friends,” dating on and off through high school, she said.

They attended high school formal dances together, and went on to marry on April 16, 1994.

Tina said Joe, a self-employed painter, reinvented himself after their children began participating in activities, and he was missing them because of work.

“He’d always been good at painting, and he just thought, ‘let’s give this a try,'” she said.

The Bonarigo family did everything it could together, Tina said.

“From the time the kids were little, we weren’t the couple that went on vacation without the kids,” she said.

For example, when Joey Jr. played football for Poland Seminary High School, Tina said her husband would be on the field holding ropes before the games for the players to run through a giant bulldog.

“I told Joey before a game that, ‘Dad could not wait to get out there on a Friday night so he could stand next to you on the field,'” Tina said.

Joe enjoyed having the kids’ experiences with them as they grew, she said. Typically, the family would have fires in their backyard and spend time together as a unit.

The family’s not sure how Joe got sick — he stopped working at houses weeks ago and everyone practiced social distancing.

It will be a hard adjustment, Tina said, without Joe.

“That’s what kind of sad. It’s bitter and it’s sweet,” Tina said. “What’s so sad is… We just hung out together. We were big backyard people. Without him, it’s going to be a big gap.”

Still, the time together is cherished, Tina said. “It gives us a little peace.”

All the family time has helped through the grieving process, Tina said.

“We didn’t waste the time we did have,” Tina said.

A week before Joe went into the hospital, Tina said Joe developed a dry cough. He called his doctor after a few days, and a prescription was written with the suggestion to self-quarantine.

Keeping in contact with their doctor, Tina said last Tuesday (March 31) Joe slept all day and didn’t want to eat.

Calling the doctor Wednesday (April 1), Joe told Tina the doctor wanted to see him. Tina stayed in the car while Joe spent an hour with the doctor.

Then, the doctor came out with Joe, telling Tina to take him straight to the emergency room because his oxygen levels were low.

“We didn’t speak. I think we both realized the seriousness of the situation,” she said, of the several-minute car ride to the hospital.

She walked Joe in, and as he was wheeled away. Tina told him she loved him.

Joe was admitted, and later sent texts to his wife.

The next day, Joe texted Tina that he would be going on a ventilator.

Tina called to check on him later that day, and the staff told her he was on the ventilator, and in a medically-induced coma. She was told to call at 10 a.m. and 10 p.m. for updates.

For the three days he was in the hospital, Tina said it felt like three years.

On Saturday, Tina said she and the kids didn’t interact much, seemingly having a sense that things weren’t going to continue well.

She called at night, and he had a fever, and his kidneys weren’t working.

Shortly after, the doctor called and gave an update that his heart was beating slowly.

Tina told the kids. “That was news I didn’t want to have to tell them for at least 30 years, that dad wasn’t going to make it,” Tina said.

Staff at the hospital held the phone up to Joe’s ear while his family said their goodbyes.

Sunday and Monday of this week were especially hard, Tina said, because she and her children couldn’t have friends and family hug them.

Almost immediately, though, Tina said the front porch was filled with food from friends, family and neighbors.

A co-worker has set up a meal train, and a neighbor has made a poster that’s hanging near the house.

One of Joe’s dear friends, Paul Sherman, said he couldn’t let Joe and the family not be honored.

Brainstorming ways to incorporate a gathering in Joe’s memory while still practicing social distancing, Sherman said he worked with law enforcement and Tina to organize “a moving memorial.”

Assigned times by name, people were able to drive by the Bonarigo house Thursday evening, waving and sending support.

“They have so many friends and family in the area,” Sherman noted.

Joe was a much-liked guy, he said.

“He’s just one of those guys where anybody meets him, you instantly like him,” Sherman said.

He spoke with Tina, who shared it was difficult to not be near Joe at the hospital, then be confined to their home while in quarantine.

“It kind of just tore me apart, hearing that,” Sherman said.

“With coronavirus, the whole game is changed with what we can or can’t do,” Sherman said.

Explaining that Poland is a close-knit community, Sherman said that everyone wanted an opportunity to not only pay respects to Joe, but also show support for the family.

Tina said the memorial is “amazing.”

The support from people, whether on social media or sending food or prayers, has been met with gratitude from the family, Tina said.

“It helps so much just to know that people are praying for us to get through this ridiculous time,” she said, referring to the pandemic.

The memorial was a reason to smile. “We all need that today,” she said.