Lowellville man beautifies village one piece at a time 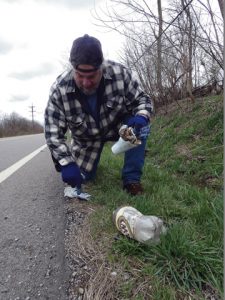 LOWELLVILLE — Driving along Youngstown Lowellville Road, small piles of garbage were seen neatly stacked every few yards on either side of the road for about a half-mile stretch.

A man wearing boots, jeans and a flannel jacket was spotted this week not too far from the Stavich Bicycle Trailhead, carefully reaching over pond water to pick up another bottle to start a new pile.

“This place is too nice to be filled with trash. It’ll make me homesick for Los Angeles,” said Bob Peterson, 65, also known as “California Bob.”

He’s lived in Lowellville for a decade, after coming to the area for work.

Walking the bike trail for exercise after eye surgery, Peterson said he couldn’t believe the filth he began to notice.

“Cans and bottles and wrappers. Every time I’d drive by I’d see a big pile of trash people would just throw out of their car. I’d think, ‘You slobs. Don’t you know how beautiful this is? The green trees?'” he said.

Peterson takes pride in his community because it’s a vast difference from Los Angeles, where he lived for 40 years.

Crediting the lower cost of living and relatively calmer pace of life of the area, Peterson said that seeing the amount of trash for the lesser amounts of residents in the vicinity is frustrating.

He began his beautification effort by the school campus about a month ago and has been working his way past the bike trail.

Saying the cleanup gives him something to do, Peterson said motorists drive by and give him a thumbs-up and blow their horn for support. Keeping him in awe are his findings.

Just since he’s started, he’s discovered part of an animal skull, old bottles and an old beer can with can-opener marks that is “rusty as can be.”

Peterson parks his truck at the bike trail, then loads the back with the trash.

When he can, he takes his personal project a step further and recycles what he can.

The labor of love is to show his gratitude to the community, as well as simply just being thankful to be surrounded by greenery and quietness.

“This place is amazing to me,” he said.