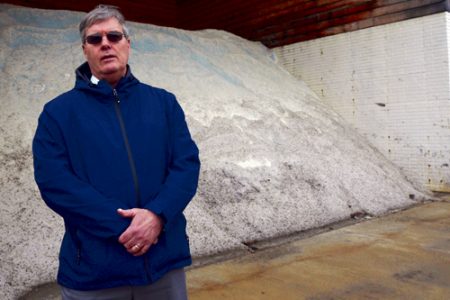 Winter in the Mahoning Valley was very mild and, while that is beneficial financially for local governments , it can be damaging to those who rely on snowfall to make a living.

This past winter, the Valley saw 42.9 inches of snow, almost 15 inches less than the average of 57.6 inches, according to the National Weather Service at the Youngstown-Warren Regional Airport in Vienna.

Many winter businesses are suffering because of the lack of snow. Some have resorted to picking up odd jobs or selling their plow equipment.

“We’ve been unemployed since November,” said Michelle Burns, who owns MR Lawn Care and Snow Removal of Warren, with her husband, Roy. “This year really killed us.”

She said they have picked up some “odds and ends jobs” to get by. They have lost between $40,000 and $50,000 and have even sold some of their equipment to make up the difference.

Fortunately, snow-removal businesses are not the primary source of income for some people. Fred Schulte of Youngstown owns Schulte’s Thrift Yard but also does snow removal during the winter. He said his income from snow removal plummeted, but his thrift store has actually benefited from the mild winter.

“People weren’t shut in like they were in past winters,” Schulte said.

The Do-Cut stores in Warren and Canfield also have seen a dip in sales, but they were prepared for it.

“Any time your sales are light, it’s not what you want, but we’ve been here a long time and we’ve had mild winters before,” said Jay Curry, one of the owners of the stores. “We don’t like to see it, but it’s all a part of business.”

Curry added that while sales were light this winter, the employees were able to continue working, and the leftover inventory will be carried over to next season.

“It wasn’t easy to sell snowblowers. We’ll be carrying over more than usual. The preseason sales were good because it snowed in November and early December, but it didn’t snow much after that,” Curry said.

While winter businesses suffer during mild winters, state and local governments benefit. The amount of salt used was less than the year before — which not only saves money this year, but next year as well.

“It’s a good problem to have,” said Ray Marsch with the Ohio Department of Transportation. The Trumbull County operations, for example, used 1,712,954 gallons of salt brine and 81,724 tons of salt.

“That’s about 17,000 less (salt) than last year. This winter we used less salt material, which allowed us to implement the brine,” Marsch said.

“I think it’s the savings you don’t see that we saw this winter,” said Mike Dockry, Austintown Township administrator, who also supervises the road department. “We didn’t have a big storm so our plows were only down twice. So we saved on the wear and tear on the trucks.”

“We are still obligated for our salt purchase this year, but we’re carrying over about 1,300 tons of salt so we’re not going to need to buy as much,” McCann said.

McCann did say Howland saved about $20,000 in overtime pay because the snow removal work wasn’t needed.

While the mild winter didn’t offer much in terms of overtime work, it allowed extra time for crews to catch up on other things — such as trimming trees, patching potholes and tending to ditches.

“Our crews have been out clearing and removing trees and we got caught up on some ditching work, and we started replacing culverts,” said Trumbull County Engineer Randy Smith. “Some of these things usually fall to the bottom of our priority list, now we’re getting caught up.”

“Our workers are staying busy. It’s like the season was extended to let us get to all this,” said ODOT’s Marsch.