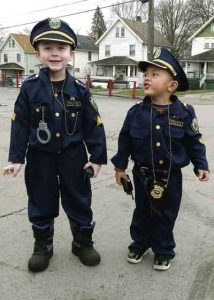 STRUTHERS — Two young men walked the streets of Struthers on Friday, keeping their eyes open for any criminal activity.

Officer Teyton Timmons, 5, and his partner Lennox Page, 3, were on the third day of their job, patroling on foot.

The outfits came from Amazon, and have been worn with honor since Wednesday, she said.

As cars drove by on Fifth Street, the two little officers waved to everyone.

Decked out with handcuffs, hats, badges, a walkie-talkie and that whistle, responsibilities are being taken seriously.

These two officers are watching out for thieves who like to steal sweet treats, Lennox said.

Crane said the boys, her son and godson, want to be officers when they grow up.

The inspiration came from Capt. D.J. Aldish of the Struthers Police Department.

“So, they became obsessed,” she said.

The gesture of a law enforcement officer making an impact on kids at such a young age is appreciated, said police Chief Tim Roddy.

Hometown heroes are also the biggest source of inspiration to youngsters, as kids are able to interact with them daily.

“It just shows the power of someone in your community that doesn’t have to be a cartoon figure or sports figure or someone on TV,” Roddy said.

Further impacting their decisions, Crane said, is a Netflix cartoon called “Morphle,” a show about a little girl named Mila who turns playtime into adventures with her pet Morphle, who transforms into different characters in her imagination.

One episode in particular is the favorite of the boys, where Morphle “morphs” into a police car because bandits are stealing things around a city.