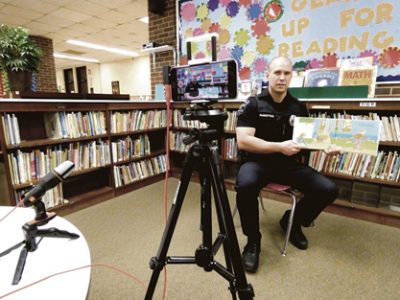 Canfield Police patrolman and school resource officer Steve Garstka reads a book for a new series that began Wednesday. Using books from the Hilltop Elementary library, he and another officer plan on reading books in videos that will be streamed on social media. Photo by Ashley Fox

CANFIELD — Although most of Hilltop Elementary School was dark and quiet, the library was lit, and two police officer were having a conversation.

Tim Lamping and Steve Garstka, both of the Canfield Police Department, are resource officers with the Canfield Local School District.

On Wednesday, the duo began something to provide some entertainment for students — not just those within their school district — as schools are closed during the coronavirus pandemic.

The idea of the officers, dressed in their uniforms while reading children’s books, came from Lamping’s family.

“My older sister is a teacher in Boardman,” Lamping said. “She asked we read books on tape for her class” as she sends material for her first-grade students at Stadium Elementary to work on.

The officers reached out to Principal Joe Maroni, who was supportive of the idea.

“We always want to cooperate with our local safety forces,” Maroni said. “That was not even a question” to give the officers building and technology access for the plan.

The decision to read for kids is to provide some kind of relief for little ones, the officers explained.

“I just hope that what we’re doing out there, while they’re watching these videos of us reading, hopefully takes their mind off what’s going on in the real world,” Lamping said.

Adults oftentimes have a “bad habit” of discussing topics in front of children that the youngsters should not hear, Lamping said.

The officers said offering the readings will hopefully “distract” kids from worrying about the pandemic.

Gartska remarked that more than ever, this is the time for children to have opportunities to be kids.

Visual storytime is also a chance for Garstka to use his skills in a unique way.

Garska has an education degree himself; his father was an officer and his mother was a teacher.

Becoming a school resource officer is “a really cool hybrid” of his background. “This is such a good way for a police agency to forge good relationships” with the community.

Lamping explained he wanted to work with kids in his capacity as an officer, shedding some light on his field.

“Being able to show kids we’re not just a badge and a uniform, we’re actually human beyond that” and showing kids there is more to officers than their job sparked interest for Lamping, he said.

There isn’t a set schedule of when the story times will be released, but they are going to try filming and releasing them as they can.

Overall, the resource officers are hoping to achieve a positive balance for students in an uncertain time, they said.

Although students across the state aren’t seeing familiar faces regularly, technology is allowing for some exceptions.

“We’re lucky in the times that we live where even though we are all quarantined and in isolation, we’re still somewhat together because of social media,” Lamping said.

Maroni has a message for students as everyone is kept in solitude: “We’re going to get through this.”