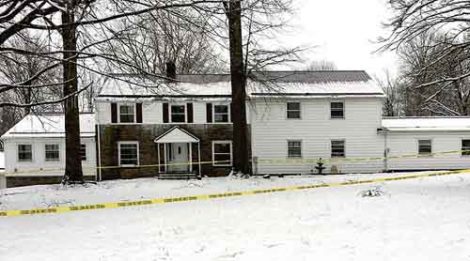 BOARDMAN — One man is dead after a Thursday shooting at a West Boulevard house.

Kane Wiesensee, 18, was taken to St. Elizabeth Youngstown Hospital where he was pronounced dead, according the the Mahoning County Coroner’s office.

Todd Werth, Boardman Township police chief, said officers arrested Emanuel Boyd, 19, of Boardman in connection with the shooting. He is being held in the Mahoning County jail.

Boyd is charged with murder, a first-degree felony, according to court documents.

The last time there was a homicide in the township was 2014, Werth said.

A motive for the shooting is not yet known, Werth said.

Officers remained at the site Thursday afternoon, processing the scene.

An autopsy was conducted at the Cuyahoga County Medical Examiner’s office.

According to the Mahoning County Auditor’s website, the house is owned by Robert Boyd.

Court records show that Robert Boyd, 49, is also in the county jail — on charges of rape, gross sexual imposition, disseminating matter harmful to a juvenile and illegal use of a minor in nudity-oriented material. The charges stem from incidents in March, April, and May of 2017. According to the indictment, Boyd is charged with the rape of a girl who was 17-years-old at the time, according to 21 WFMJ.