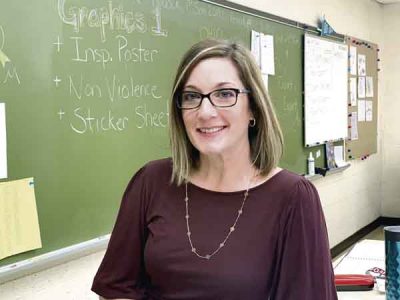 Staff photo / J.T. Whitehouse Boardman High School art teacher Jenna Hudock recently spent two weeks at the Golden Educators Residency in upstate New York, where she was one of only three teachers nationwide accepted into the prestigious summer program. Artwork she created there will be on display through March 5 in a one-woman show at the Jewish Community Center in Youngstown.

YOUNGSTOWN — Boardman High School art teacher Jenna Hudock has her own artwork on display in a one-woman show.

The show, which opened Jan. 16 at the Jewish Community Center on Gypsy Lane, is called “Dissonance and Distortion” and runs until March 5. It contains 16 pieces from Hudock.

Hudock is a graduate of Stow-Munroe Falls High School in Summit County and developed an art interest while in elementary school.

“I remember the posters of master artists my teacher had hanging on the stage art room,” she said. “She was great; we did plaster sculptures as well as black-and-white solar exposure photography with a hand-built ‘camera’ using an oatmeal container.”

Hudock’s parents noticed her passion for art and allowed her to take private drawing lessons and eventually oil painting instruction from a neighboring artist.

In high school, she took most of the offered art classes, and growing up in the Akron area also gave her exposure to the Akron Art Museum, where she volunteered for a youth program.

“I was a Scholastics Art recipient several times in high school and, more importantly, had a piece in the governor’s show my sophomore year,” she said.

“I went into teaching right away, in Cuyahoga Falls,” she said. “Boardman hired me in 2016 when the district made Center an intermediate school. I was hired to teach art part-time. A year later, a position opened up at the high school. I’ve been teaching digital arts classes there since 2017 full-time. Last year, 2019, I received tenure. It was the same day that I’d been notified as having been selected for the Golden Educators residency.”

Hudock recently spent two weeks at the Golden Educators Residency in upstate New York, where she was one of only three teachers nationwide accepted into the prestigious summer program. Artwork Hudock created there will be featured at the show at the Jewish Community Center.

At the residency, which was in New Berlin, N.Y., Hudock said she was treated like family by the Golden family.

“They have a factory, Golden Artists colors, and run a foundation that supports painting residents,” Hudock said. “They only offer the educator residency one time a year. They fed us from a five-star restaurant, allowed 24-hour access to studio space, our own private quarters, as well as shared living spaces. We also received a $1,000 gift card to use on the Golden Artist colors.

“We had a few workshops, a few dinner parties meeting local art teachers, as well as scholastic employees. They also gave us a tour of the factory. It was set in the country, with a lot of space to take walks, enjoy sunsets and the view of the foothills. The residency itself is in a large converted chicken barn.”

She said the residency has given her some authentic validation as a painter. Although she submitted artwork to local shows — such as the Hoyt, the YWCA women’s show, the Trumbull Art Gallery regional juried exhibition, the Butler Area Artists Shows, the YSU Festival of the Arts and the Butler Midyear National Juried shows — this was her biggest application yet.

“I feel pride, and I feel validated as a contemporary artist. I’ve always loved teaching art, it’s the job for me, so having been to the residency is just a fun way to brag a bit,” she said.

YOUNGSTOWN — A Struthers Road, New Middletown, woman was indicted Thursday on charges of abuse of a corpse and ...

YOUNGSTOWN — West Federal Street between Market and Phelps streets will be closed from 7 a.m. to 3 p.m. ...

YOUNGSTOWN — The team that brings The Vindicator newspaper to thousands of readers daily will host a series of ...