Alternative could be fiscal emergency 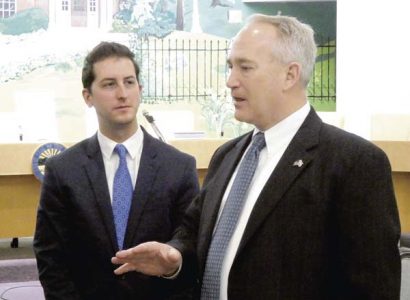 LIBERTY — Ohio Auditor Keith Faber said Youngstown should accept his offer to repay $4,415,332 it improperly spent from three funds over a 15-year period because a court case could leave the city in fiscal emergency.

“There’s some argument that, if this goes forward, they don’t get a multi-year restructuring plan,” Faber said during a Tuesday interview after a Youngstown Warren Regional Chamber event at the Liberty Township Administration Building. “It would have to be (paid back) immediately, which could kick them into fiscal emergency.”

In response, Mayor Jamael Tito Brown, who has refused to reimburse the money from the general fund as instructed by Faber, said: “We still believe that the court (has) to compel a repayment. We believe Auditor Faber should focus on how to help my administration move Youngstown forward and not talk about fiscal emergency. We are trying to build relationships with our state partners.”

Faber said that’s what his office did when it offered to have the city pay the money he said was improperly spent from Youngstown’s water, wastewater and environmental sanitation funds in 2017 to 2018 over a 15-year period from its general fund rather than all at once. An annual repayment over 15 years would be $294,355.47.

“We thought they could make those adjustments without putting them into fiscal watch or fiscal emergency,” he said. “They would have had to make tough decisions.”

Faber said that Brown “keeps saying unless he has a court order he’s not inclined to (pay back the money). I don’t want to have to go that route. We have other tools as well that we can utilize to get compliance, but it’s pretty clear that these monies were spent inappropriately. We believe the city’s already gotten some legal advice that tells them that they need to do this. They need to step up to the plate and do what’s right.”

State audits of the city’s 2017 finances, released Aug. 29, 2019, and of its 2018 finances, which came out Dec. 31, 2019, said Youngstown improperly spent money from water, wastewater and environmental sanitation funds primarily for economic-development purposes. It required the city’s general fund to pay back the money.

Other misuses of the water and sewer funds, according to the 2018 audit, were $28,758 to buy an SUV for Brown, $2,120 charged for Ohio Municipal League dues and $45,379 for software support and maintenance. After the issue was pointed out by the auditor’s office, the city used general-fund money to repay the water and sewer funds for the SUV and the municipal league dues, Faber said. Also, the city provided supporting documentation or made general-fund repayments for all but $19,176 of the software expenses, he said.

The 2018 audit found that the city improperly spent $524,629 in water funds for an irrigation system at its Henry Stambaugh Golf Course.

Also, the audit raised concerns about the police department paying too much money to officers who worked out-of-rank as well as issues with giving accumulated time — additional time off instead of being paid — for officers.

Faber said his office is about to start an audit of the city’s 2019 finances.

“We think they should take action sooner rather than later,” he said. “They certainly should step forward and accept the offer that we made to do the recasting and the restructuring in a way that doesn’t cause a long-term or short-term fiscal difficulty for the city.”

Asked if the 2019 audit will give the city more time to make a decision, Faber said, “Not necessarily. What it does is give us a reason to be in there and continue to ask more questions.”

He acknowledged: “The mistakes are common.”

Using public money and public resources, Faber said, is “a violation of state law. Whether it rises to the level of a state crime is an indicator of the circumstances. I would generally not treat that as a criminal matter.”