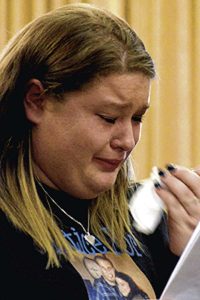 Staff photo / Ed Runyan Kaley Buccini cries as she talks about her fianc, Bradley Ronci, who was killed Sept. 28, 2019, during a crash in Milton Township. The driver of the vehicle that caused the crash, Gregory Barnhart, was sentenced Thursday Jan. 9, 2020, in Mahoning County Common Pleas Court.

YOUNGTOWN — Prosecutors say Gregory A. Barnhart had an illegal level of marijuana metabolite in his system when he crashed head-on into another vehicle Sept. 28, 2019, in Milton Township, killing the other driver and his passenger.

Ken Cardinal, assistant Mahoning County prosecutor, said the two counts of aggravated vehicular homicide Barnhart pleaded guilty to Thursday in Mahoning County Common Pleas Court were based on Barnhart having marijuana intoxication at the time of the crash.

Judge R. Scott Krichbaum sentenced Barnhart, 33, of Miller South Road in Bristolville, to the prosecutor-recommended 12 to 15 years in prison.

During the hearing, Barnhart’s attorney, Andrew Zellers, mentioned that the crash occurred because of something that happened the night before. After the hearing, Zellers declined to elaborate on what that was.

But Cardinal said Barnhart admitted to him the “something” was that Barnhart “smoked a lot of pot the night before.”

Cardinal added: “Whether it’s marijuana, heroin or alcohol, it has an effect on your ability to operate a motor vehicle and make judgments. They are mind-altering drugs.”

After the crash, Barnhart was unsteady on his feet, and his eyes appeared to be bloodshot, according to an Ohio State Highway Patrol crash report. A trooper also observed Barnhart’s speech to be “slow and slurred.”

Cardinal said the testing done on Barnhart after the crash did not show any alcohol intoxication.

“Mr. Barnhart kept closing his eyes and had to be told several times by the (ambulance workers) to keep his eyes open,” the patrol’s report states.

Barnhart was driving a Ford F-350 truck pulling a trailer when he hit a van driven by Howard W. Mounts, 68, of New Middletown on state Route 534, killing Mounts and a passenger, Bradley J. Ronci, 34, of New Road in Austintown.

A driver behind the van saw Barnhart’s vehicle cross almost the vehicle’s full width over the center line in the wrong lane. It was about 9 a.m.

Mounts swerved left to avoid Barnhart, the OSP report stated, but the two vehicles collided as Barnhart brought his vehicle back into his own lane.

Cardinal said Barnhart was a habitual marijuana user. He had another crash two weeks after the first one, this time on Interstate 76, also in Milton Township. He was charged with operating a motor vehicle impaired in that crash as well. Barnhart and a passenger were both taken to St. Elizabeth Youngstown Hospital.

That case is pending, but Cardinal said it’s unlikely prosecutors will bring Barnhart back from prison to complete the case because that charge would not increase Barnhart’s punishment.

Barnhart had just gotten out of prison the previous August on convictions out of Trumbull County for 2014 burglaries and drug charges.

Krichbaum ordered Barnhart to never again have a driver’s license.

Before sentencing, James Serenko, nephew of Mounts, told Krichbaum that Barnhart should never get out of prison because “all he does is drugs his whole life. He has no reason to get out any time soon, and even when he gets out, he can’t do nothing. He can’t get a job. He’s worthless. He’s absolutely worthless.”

Leslie Mounts, daughter of Howard Mounts, said: “It’s absolutely cruel and agonizing. The pain and sadness that has taken over me is scary. I never thought at age 28, I would lose my best friend, the first man to ever love me unconditionally, the man I wanted to make proud of everything I did in my life.”

Ronci’s mother, Tammi Petrusky, said she wants no other mother to go through what she did and what her son’s fiance, friends and family went through. “I have lost my only child. He was my life.”

LORDSTOWN — Fresh off announcing FirstEnergy’s intent to buy 250 of its battery-powered Endurance pickup ...

WARREN — The man who shot Britney Mazanec did not receive any sympathy Wednesday from either the victim’s ... 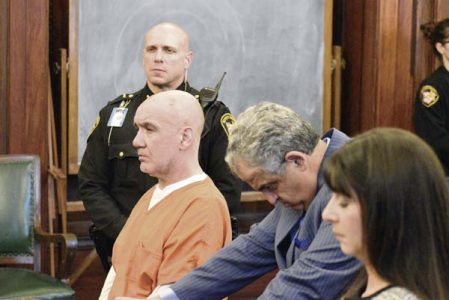 Court supports city of Youngstown in dispute over gas line