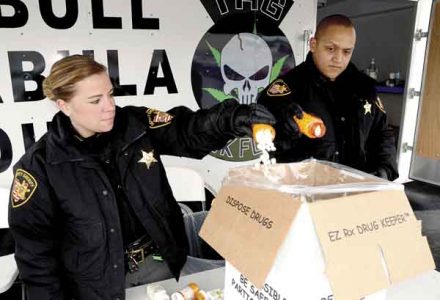 Forensic Fluids Laboratories conducted oral drug testing with data showing people in Mahoning County were more likely to test positive for a substance than Trumbull County people who were tested. The lab also concluded that methamphetamine, cocaine, buprenorphine and fentanyl use were on the rise throughout the Midwest. Many law enforcement agencies conduct events to dispose of prescription drugs, such as Operation: Empty Medicine Cabinet last spring, above, with Trumbull County Sheriff’s deputies Melissa Kelly and Nick Clayton. Staff file photo / R. Michael Semple

The company collected data to create a report based on the departments it contracts with, showing which drugs trended in which states between 2014 and 2018. It only has 2018 data for testing done in Trumbull and Mahoning counties.

The data shows people in Mahoning County were more likely to test positive for a substance than Trumbull County people tested.

Of the people who tested positive for a substance in Trumbull County, data from the lab shows 22.73 percent had cocaine in their system, 18.18 percent had methadone — a drug used to wean people off harder opioids, and 13.64 percent of people had THC — the compound in marijuana that gives people the feeling of being high — in their system.

In Mahoning County, the people tested were most likely to have marijuana in their systems — 25.98 percent, while cocaine was found in 14.20 percent of samples and in 8.66 percent of samples the opioid pain killer buprenorphine was discovered.

The lab concluded that methamphetamine, cocaine, buprenorphine and fentanyl drug use were on the rise throughout the Midwest between 2014-18.

“Some counties, such as Montgomery, Delaware and Wood (in Ohio), have positive cocaine rates more than double that of areas in Guernsey, Wayne and Muskingum. Many counties show rates of cocaine positives across all years examined by Forensic Fluids Laboratories,” the study states.

The study found an increase in the presence of fentanyl, too, “in areas surrounding Ohio’s more urban counties, especially in the northeast and southwest parts of the state.”

But, in Indiana, cocaine use decreased significantly. The counties with the highest cocaine usage remain those with large urban areas — such as Marion County where Indianapolis is. The proximity to a major highway, such as Interstate 94, correlated with high cocaine usage in these counties, the study found.

AUSTINTOWN — Some 35 people came to the Austintown Library on Monday for the first “Meet the Vindicator” ...

Two sent to hospital after I-80 one-vehicle crash

AUSTINTOWN — A man and a woman were both taken to the hospital after one vehicle lost control and struck an ...

Man charged with assault at church

YOUNGSTOWN — A man, 35, was found dead with multiple gunshot wounds at 720 Parkview Ave. off of Glenwood Avenue ...

YOUNGSTOWN— Fire Station 12 will be closed for about 60 days due to safety issues. Fire Chief Barry Finley ...