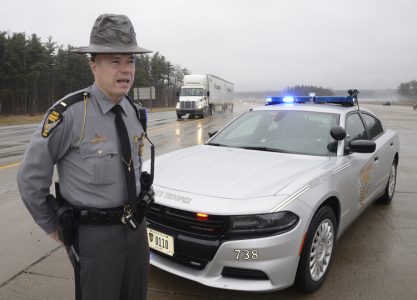 Staff photo / R. Michael Semple Lt. Brad Bucey, commander of the Canfield Post of the Ohio State Highway Patrol, stands along Interstate 80 just west of the Meander Creek Reservoir in Jackson Township — near the location where two “whiteout” crashes involving lots of vehicles took place in November and December. Bucey has asked the Ohio Department of Transportation to consider variable speed limit signs to help reduce the prevalence and severity of such crashes.

CANFIELD — With prompting from the Ohio State Highway Patrol, the Ohio Department of Transportation has begun a study of crash data for Interstate 80 in Mahoning and Trumbull counties to determine whether “variable speed limit” signs might improve safety there.

Last week, ODOT began a study of crash data with a goal of looking at options that might improve safety on the interstate from the Pennsylvania line to Bailey Road in Jackson Township, Mahoning County.

Canfield Post Commander Lt. Brad Busey said he spoke with ODOT at the scene and after crashes on I-80 Nov. 12 that involved 40 vehicles in two waves. The first wave was triggered by a tractor-trailer that overturned in the middle of the westbound lanes near the Meander Reservoir. A passenger in a car died and another person was seriously injured.

Busey said the Nov. 12 crashes and another nine-vehicle crash in nearly the same place Dec. 18 were similar in that both happened in “whiteout” conditions, causing drivers to report that they “couldn’t see.”

The surprise “whiteout” reduced visibility to “two- to three-car lengths” and put a coating of snow on the highway, the patrol said in its crash report.

“You get whiteout and it’s slippery. It’s very difficult to stop,” said Bucey, who was among the troopers at the scene that day.

Busey said he believes many commercial truck drivers think their vehicles can hold the road better than other vehicles because of the amount of weight they carry.

On Nov. 12. when one truck lost control, about 10 tractor-trailers a short distance behind also got entangled. Busey said he thinks they were traveling at about the speed limit despite the adverse conditions.

Busey said he thinks posting a temporarily slower speed limit in that situation might slow drivers down.

“If you slow them down, it might not be as serious. It might be a fender- bender,” he said. It took more than 12 hours to clear away the wreckage from the highway Nov. 12, causing big traffic delays.

The discussions Busey had with ODOT focused on electronic speed-limit signs being used for the past couple of years along Interstate 90 in Lake County that can lower the speed limit in bad weather.

The variable speed limits in Lake County have been credited with dramatically reducing the number of injury crashes there, but the Ohio General Assembly has so far only only allowed them to be used in that location.

Justin Chesnic, spokesman for ODOT’s Akron District, said if the analysis of the I-80 corridor in Trumbull and Mahoning counties suggests the need for variable speed limit signs, ODOT will ask legislators for permission to install them.

Chesnic said not to expect a decision right away because it will take time to study the crash data. ODOT will be looking at “everything” affecting safety in that corridor, he said, not just the question of using variable speed limits.

He said he doesn’t know how the I-80 corridor here ranks in terms of crashes compared to other parts of the state, but it ranks second- or third-highest in amount of tractor-trailer traffic in the state. Tractor-trailers make up about 30 percent of vehicles using it.

Though Bucey said he has not seen any indication that crashes near the Meander Reservoir are more prevalent than away from water, Chesnic noted that bridges always get special attention in bad weather.

Bridges, such as the one over the reservoir, “do tend to freeze quicker” than other types of roadways, Chesnic said.

A crash that killed a Canfield man Tuesday night happened in the eastbound lanes of the interstate about a mile west of the Ohio Turnpike, placing it a couple of miles away from the reservoir. Weather was not considered a factor in the crash. His car left the highway and struck a tree. The driver was ejected.

AKRON — A federal judge has ruled against the request of former Craig Beach police Chief Andrew Solomon, 38, to ...

For the first time since the last two days in June, the number of new COVID-19 cases was below 900 for two ... 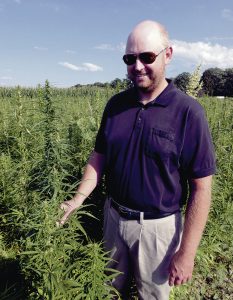 Planting for the future