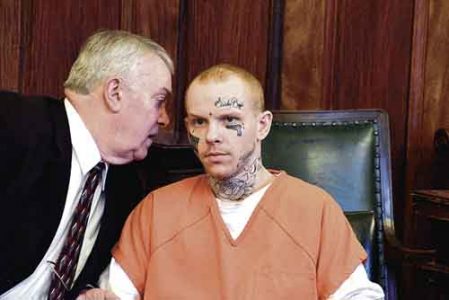 Staff photo / Ed Runyan Daniel Uncapher, right, listens as his attorney, Ronald Knickerbocker, talks to him Tuesday in Mahoning County Common Pleas Court. At the hearing that followed, Uncapher was sentenced to 5 to 7 1/2 years in prison for kidnapping, abduction, assault and aggravated menacing.

YOUNGSTOWN — Daniel Uncapher told Judge Anthony Donofrio on Tuesday prior to being sentenced to 5 to 7 1/2 years in prison that he thinks his decision years ago to get tattoos on his face, and his drug and alcohol addictions have hurt him.

Uncapher, 27, of Youngstown, took responsibility for his actions, and referenced God.

“A long time ago, I made a choice to get these tattoos on my face, sir. And you know, I feel like they are part of the reason why I lost (my) trial that day, and I would also like to say I would have never done these things to (the victim) had I been in the right state of mind,” he said.

He added, “I do want to better my life, not only for (the victim) but for my kids out there, your honor.”

But Kevin Trapp, assistant prosecutor, spoke for the victim — a young woman who dated Uncapher until Sept. 26, 2019, when he showed up intoxicated at her apartment on Oak Hill Avenue acting strangely. He bit her face, choked her, bruised her and made her fear for her life.

Uncapher was convicted at trial last month of kidnapping, abduction, assault and aggravated menacing after the woman and other witnesses testified against him.

“You heard her blunt, unwavering testimony as to what took place back in 2019 with the defendant. You heard that her face was scarred (for) a few weeks afterward,” Trapp told the judge.

“You also saw and heard first-hand how her mind, her psyche and most importantly her sense of security, which we as citizens are all entitled to, was really shaken that day and scarred her for life.”

The victim did not attend the hearing. She now lives in upstate New York with her two children, Trapp explained.

Trapp reminded the judge that Uncapher has been to prison before and suggested after serving this prison sentence, Uncapher will probably do something similarly evil.

“The state does not feel this will be the last time the defendant will be facing felonies of this magnitude,” Trapp said. “He will hurt people, good people of Mahoning County, state of Ohio again.”

In his remarks, Uncapher’s attorney, Ronald Knickerbocker, reiterated some of his arguments from the trial, saying the victim suffered “no serious physical injury” and produced no medical records to prove that she did.

“There were childen in the home. They were never disturbed,” he said of testimony indicating that her two kids never came downstairs despite her screams for help.

Jurors were not allowed to hear about Uncapher’s 2003 conviction and one-year prison sentence in Trumbull County when he was 20 and part of a Niles youth gang called the Savages.

Members of the gang kidnapped and pistol-whipped a woman, 21, and gave a man a permanent eye injury during a beating. One member of the gang got four years in prison, one got three, and one juvenile got 2 1/2-year sentence.