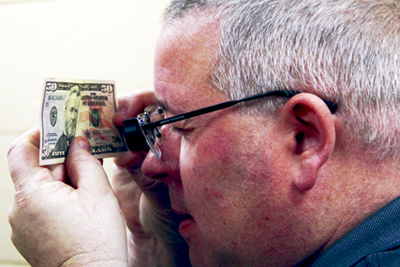 Austintown Township Police Detective Shawn Henever studies a $50 bill with a magnifier to see small details printed on the bill.

AUSTINTOWN — Detective Shawn Hevener said it has been five or six years since he’s had a “big” counterfeit currency case, but plenty of bad bills are in circulation in Austintown Township.

These bad bills especially include “movie money,” or prop bills from overseas that are passed off as real money.

The movie money can be bought online, and has red or pink Chinese characters on it or the phrase “made for motion pictures” printed in place of “United States of America.”

Hevener said the bills have become a problem in hurried cash exchanges for products from online selling platforms such as Facebook marketplace and letgo. A buyer will use movie money or a mix of real and fake bills, which the seller often doesn’t check for authenticity until it’s too late.

In-and-out businesses, especially fast food restaurants without security cameras, also take a hit from counterfeits, Hevener said. Many fast food chains have posted signs at drive-thru windows alerting customers that $50 and $100 bills will not be accepted due to the high circulation of counterfeit bills.

There are a number of things to look for when identifying legal U.S. currency, according to Hevener.

First, the paper texture: Real currency has a fibrous quality, while the copy paper used in movie money or home-printed counterfeit tends to be waxier. Some home counterfeiters will also glue two pieces of paper together to get around double-printing, changing the thickness of a bill.

Real currency also has many detailed features. On a newer $50 bill, a close examination of the golden 50 will reveal an almost sparkly quality; $5 bills and higher contain watermarks, which are almost impossible for even a skilled counterfeiter to replicate.

The bills also have small vertical ribbons that read “USA” with the denomination. These, like watermarks, can be seen when a bill is held up to the light.

Those ribbons can help identify a higher-quality counterfeit bill, made by bleaching and reprinting legal tender.

“Real counterfeiters will bleach a $5 bill and reprint it as a $50,” Hevener said. He added these bills will pass a test with a counterfeit pen, but can still be identified by the water-marked ribbons.

Another trick Hevener said he only recently learned is testing the collar of the figurehead on a bill. The founding father’s jackets are embossed, which gives each a discernible texture.

Anywhere from $700,000 to $1 million in counterfeit bills circulates through northeast Ohio every year, according to Jonathan Schuck, special agent in charge with the Secret Service Cleveland field office.

Counterfeit bills in northeastern Ohio come back to Schuck’s office to be tracked — hopefully back to the source. Compared to other areas, northeast Ohio has a “middle to lower” circulation, he said.

“It’s not a huge problem, but it’s still a million dollars,” said Schuck. He said most of the money that comes to the Secret Service is cash that banks get in night deposits, but some comes from local law enforcement agencies, who get calls from businesses who accidentally accept the fakes.

“It affects financial infrastructure. Typically it’s the businesses that are losing money,” said Schuck. “Our goal is to find whoever manufactures it.”

Boardman police Detective Ben Switka said in Boardman, the police department often gets a counterfeit case a week, but the frequency varies. He said common counterfeit bills are $20s, $50s, and $100s.

“A lot of places tell their employees you’ve got to check every bill, and [counterfeits] just get slipped in sometimes,” said Switka. He said knowing the security features on legal currency is important.

“We print out the U.S. treasury ‘how to identify bills,'” said Gulfo, who said employees understand how to check the feeling and details of a bill.

“We rely on that more than the pens,” she said.

Gulfo said some area Dunkin Donuts locations deal with counterfeit bills more frequently than others, but for the most part it doesn’t cause the coffeehouse too much trouble.

“I’ve been here a very long time,” said Gulfo. “I feel like it’s going to continue to be a problem, but a small one.”

“You get some. Everyone gets some sometimes,” said Bassil. He said employees can usually tell a bad bill by touching it. The denomination varies, with some larger bills as well as $20s and $5s.

Schuck said under a new state law, possessing or passing counterfeit bills is a felony in Ohio.

“It makes it a little harsher of a crime for people passing it,” said Schuck, who added that gives local police departments more leverage.

Passing counterfeits used to be misdemeanor under “criminal simulation,” according to Hevener. The act only became felonious when $5,000 or more in fake currency was found on one person. Now, possessing any amount of counterfeit money can be a felony.

Hevener, however, said police understand people sometimes don’t realize they are passing it or have it to begin with. He said in Austintown, police prosecute possession of counterfeits if they can link the bills back to the person who passed them and have enough evidence to prove it was intentional.