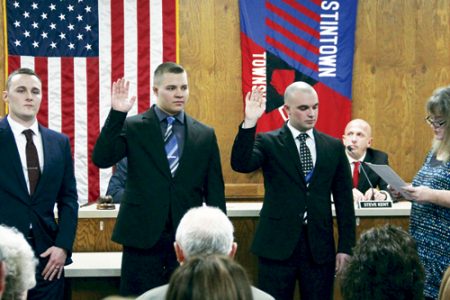 Three new police officers are sworn into the Austintown Police Department. They are, from left, Anthony B. Morucci Jr., Nathan R. Spitler and Chance A. Hanshaw during Monday's Township Trustee meeting. Morucci, Spitler and Hanshaw fill positions open due to retirements.

Nathan R. Spitler, Anthony B. Morucci Jr. and Chance A. Hanshaw were hailed as “the cream of the crop” as they were sworn in Monday night by fiscal officer Laura Wolfe.

“These three individuals impressed us all,” said police Chief Robert Gavalier, during the township trustees meeting.

Gavalier said the hiring process for the officers took about six months and involved a lot of steps.

“At the end of the hiring process they come in and sit with the staff, we interview them, and then we pick who we want to hire,” said Gavalier. “It’s not my choice, it’s the staff’s choice.”

The trio will be in the patrol division and fill positions vacated by officers who left or retired, according to Gavalier. He said the hires bring the department up to 40 strong, one shy of the 41 that the department has been able to have in the past few years because of grants.

“We’ve had a couple guys that found out that this is not the easiest place to come to work, but it is the best community to work in, and that is because we expect the best from you,” said Trustee Jim Davis. “We know what we’ve got coming and we’re very, very excited to have you.”

Gavalier said Spitler, Morucci and Hanshaw are starting at $22 an hour and will later be raised to the department’s full wage. They are the first officers to sign a five-year contract with the department.

AUSTINTOWN — Some 35 people came to the Austintown Library on Monday for the first “Meet the Vindicator” ...

Two sent to hospital after I-80 one-vehicle crash

AUSTINTOWN — A man and a woman were both taken to the hospital after one vehicle lost control and struck an ...

Man charged with assault at church

YOUNGSTOWN — A man, 35, was found dead with multiple gunshot wounds at 720 Parkview Ave. off of Glenwood Avenue ...

YOUNGSTOWN— Fire Station 12 will be closed for about 60 days due to safety issues. Fire Chief Barry Finley ...