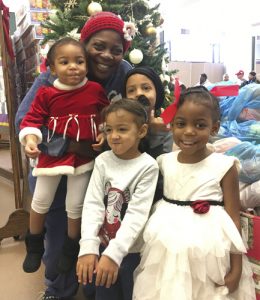 YOUNGSTOWN — Roberta Richard’s eyes began to mist as she slowly scanned the social hall to see many people sharing food, time and conversation around tables with one another.

For the Youngstown woman, you could say that in the truest sense, this was the gift that keeps giving.

“Family,” Richard said when asked what she thought was the most significant and moving aspect of seeing children, teens and adults of all ages gathered for a Christmas meal. “It’s for the people; it’s not for me. We love to give back.”

One way Richard gave back was to help coordinate and bring together many in the community for the 33rd annual Gleaners Christmas Dinner on Wednesday at St. Patrick Church, 1420 Oak Hill Ave., on the South Side.

Breaking tradition a bit this year were the Ray and Perry families of Salem, who prepared hot dogs, pizza, macaroni and cheese and banana nut bread mainly for the children, Lordi said.

He added that about 49 volunteers performed duties that included signing in guests and manning the parking lot as well as passing and serving food and desserts.

Richard, who suffered nerve damage to her left side after a knee replacement last summer, said the family-oriented dinner is vitally important for many recipients also because some are homeless and struggling in other ways. In addition, the President Donald Trump administration recently announced an estimated $4.5 billion cut to the food-assistance program, something that will result in an increased need for food, she continued.

Among those Richard considers part of her extended family are Kim Simmons of Youngstown and her daughter, Kaylyn Bell, an Eastern Gateway Community College freshman studying to be a medical assistant.

In addition to offering a nourishing meal to some who might otherwise go hungry, the dinner gives young people a good opportunity to witness the actions of those who unselfishly give to others, reach beyond oneself and operate in a spirit of unity, Simmons observed.

“It makes Christmas stretch and be happy,” she said about the gathering. “They make sure you have something so you can have a silent night, not a growling night. People can get along and sit together no matter their backgrounds, and all eat dinner as one family.”

“It’s great to see all the children, and it’s God’s will for everybody to have a family,” said Chalfant, who has attended the dinner the last four or five years. “We get to see all of the family at one time. We’re all brothers and sisters.”

After the meal, several volunteers assembled to distribute gifts to children and adults. Among the items given to attendees were bags of candy, jars of peanuts, snack boxes, stuffed animals, cologne kits, shaving cream and a variety of toys and stocking stuffers.

To help them stay warm this winter, children also were given scarves, gloves and fleece-lined caps.

Despite the gifts and the church’s kindness in hosting the get-together, the true, deeper meaning lies in something much bigger than anything material, Richard observed.

“It’s all about Jesus’ love and it’s all about children,” said Richard, who also has three daughters and nine grandchildren. “It’s about being a family.”