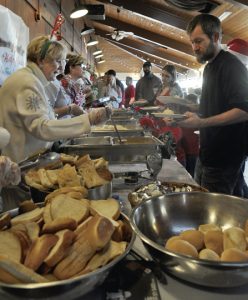 Danny Speo, right, of Leavittsburg, gets some gravy for his Christmas Day dinner at Aulizio's in Warren. The Speo family decided to go to the free community dinner for the first time this year.

WARREN — Sitting off to the side of a serving line that stretched about 20 people in length was Shirley DiVencenzo.

The Cortland resident was serving cookies at the 31st annual Christmas Day dinner as a volunteer for Families Helping Families. The dinner was hosted by Aulizio’s Banquet Center.

“I’ve always volunteered for lots of things, so I thought this would be fun,” DiVencenzo said, adding her children encouraged her to volunteer with friends who have been involved with the dinner for 13 years.

One young lady told DiVencenzo that she has been attending the free community meal since she was a baby, and DiVencenzo estimated the woman to be in her 20s.

“It’s been a really nice day. They’ve all been so good and so many of them have come for years,” DiVencenzo said.

For the second year in a row, the Krause family of Masury attended the Christmas dinner.

“We like coming here on the holiday,” said April Krause, the matriarch of the family, who sat next to husband LeRoy.

With most of the extended family living in Pennsylvania, Krause, who has a 15-month-old daughter named Madilyn, said the dinner is better than sitting at home.

Children who attended the dinner were able to choose one gift to take with them. Madilyn chose a Barbie doll, which Krause said she was excited about.

The free dinner came to Trumbull County as a partnering event with the Christmas dinner at St. Patrick Church in Youngstown, said Dan Polivka, chairman and Trumbull County commissioner.

Anyone in need is welcome to the dinner, Polivka said.

The dinner included turkey, ham, side dishes, beverages and dessert, as well as a visit from Santa Claus and Mrs. Claus, and games for children.

Polivka said that this year, about 350 people attended, which is comparable to last year’s 400.

Making it possible is the volunteer base that help clean tables, seat guests and serve food.

DiVencenzo noted that she enjoyed her time volunteering at the dinner, as the organizers made the staff feel “very regal.”

“It’s well-rounded so no one feels excluded,” Polivka said.