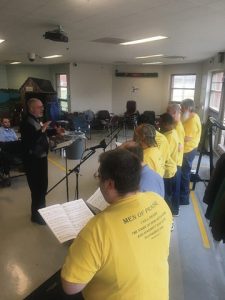 LEAVITTSBURG — Retired Austintown Fitch choir director Craig Carson and a choir of about 10 inmates are getting ready to perform their Christmas musical program at the Trumbull Correctional Institution.

Carson retired from Fitch in 2016 with three decades of music teaching under his belt. With a master’s degree in vocal performance from Florida State University, Carson said that from a very young age, music has been the love of his life.

He said he has been volunteering at the Trumbull Correctional Institution since about 2002, but when he retired, he wanted to do more.

“I talked to one of the chaplains at that time … I said, ‘Is there anything more I can do there?’ He said, ‘You’re a choir director, why don’t you start a choir?'”

Carson said one of the inmates came up with the name “Men of Praise.” The group, which sings mostly religious music with a few fun cover songs sprinkled in, performs monthly at worship services in the institute in addition to a Christmas program.

“It’s an outlet for them to express their talents in a spiritual sense,” said TCI chaplain Alexander Kostenko. “They feel that they are enriching themselves and giving to the Lord the talents that he has given them.”

Carson said although some of the inmates in the choir are perpetrators of violent crimes, God is a redeemer in their lives.

“I believe they would tell you that Christ has made a difference in their life and they’re not that anymore,” Carson said.

The choir also allows some flexibility in the inmates’ lives. Carson said the inmates get to wear yellow t-shirts that have “Men of Praise” written on the back when they sing, giving them a break from their standard blue uniforms, and singing affords them the opportunity to get out of their cells.

“I would think for some maybe it’s the highlight of their day,” Carson said.

Kostenko said people outside the prison tend to give positive feedback about the choir and the institute’s several other inmate musical groups.

“People are excited about it, seeing that the inmates are expressing their talents,” Kostekno said.

The group’s CDs, “Lean on Jesus” and “Bound for Glory,” made possible through donations and one inmate’s skill at recording audio, circulated to family members of the incarcerated and volunteers of the prison. They are now available to stream on services such as Spotify, Amazon Music and iTunes.

Carson said the music has had a “good response” outside of the prison walls, touching the lives of people in turmoil.

“I’ve obviously heard from people who are either recovering drug addicts or recovering alcoholics that they’ve been blessed by the impact,” Carson said.

Carson said he tells the inmates that their music makes a difference.