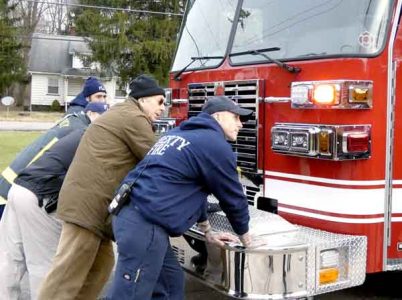 Liberty Trustee Arnie Clebone joins Station 35 firefighter Josh Cleland and others to push the new fire truck into the station. This is a tradition among firefighters when welcoming a new truck.

“This is very exciting. It’s been over 10 years since we had a new truck,” said fire Chief Gus Birch. “It is in service as of right now.”

The new truck was a demo unit that came from the Sutphen Corp. in Columbus.

“It takes a year to build a fire truck, so we were looking at some demos because they’d come quicker,” said firefighter Aric Anderson, who was the driving force behind getting the new truck.

The new truck cost $485,000 out of the fire fund and will be the main fire rescue unit for Station 35, replacing the truck that was damaged in a crash earlier this year. It is equipped to respond to all auto accident, fire and EMS calls when needed.

“It’s a big deal and a lot of money,” said Birch, who said the fire department got a loan to help pay for the truck. “We’re not able to do our job without the proper equipment.”

To further save money, the firefighters mounted the equipment from the damaged fire truck in the new truck themselves.

“That (damaged) engine has since been repaired and was transferred to the Belmont Avenue station because it’s not as busy, as its main truck. The main truck that was there is over 25 years old and was put in reserve,” said Birch.

“From a safety standpoint, it’s more comforting to drive a new truck but job-wise, a fire truck is a fire truck,” Anderson said. “It has the same equipment as the previous truck, just organized better.”

According to Anderson, the department is on an “uphill climb” with this new truck and the two ambulances that arrived a little more than a year ago. He said they’ll wait until grant season to apply for more new equipment.

The firefighters of Station 35, Birch, police Chief Toby Meloro, and trustees Greg Cizmar and Arnie Clebone officially welcomed the new truck by pushing it into the station.

Pushing in a new truck is a tradition among firefighters that dates back to the time of horse-drawn equipment– which could not be easily be backed into the building by the horses.