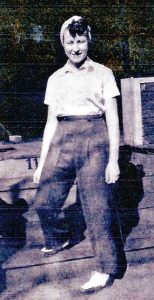 Submitted photos This is a photo of longtime Hubbard resident Miriam Hopkins — then Miriam McCutcheon — when she worked as a “Rosie the Riveter” at the Goodyear Aircraft Corp. in Akron during World War II for $35.54 per week.

HUBBARD — Early Sunday Dec. 7, 1941, Chief Petty Officer Gene McCutcheon was just beginning another day aboard the USS West Virginia in Pearl Harbor, Hawaii, when suddenly the morning — and the world — was shattered.

The first bombs dropped from the first wave of Japanese bombers just before 8 a.m. The West Virginia was struck by torpedoes launched from a midget sub and immediately began sinking.

Ordered to abandon ship, McCutcheon managed to swim ashore and take cover under a truck. Japanese Zeros strafed the field. McCutcheon knew that if they hit the truck he was under, it would be the end for him. But the strafing stopped just yards short of it and McCutcheon lived to tell the tale.

At that moment, 4,580 miles away in the tiny town of Reedy, W.Va., McCutcheon’s little sister, Miriam, was on her way home from church. Eighteen months later, she would become an American hero herself. She would go into service as one of the country’s legendary “Rosie the Riveters.”

Rosie the Riveter was the iconic star of a campaign aimed at recruiting women to fill defense industry jobs left vacant during World War II by the 16 million men who fought it. The bandanna-clad Rosie — as painted by Norman Rockwell — became one of the most successful recruitment tools in American history.

More than 310,000 women worked in the U.S. aircraft industry during the war, making up 65 percent of the industry’s total workforce.

Miriam Armistice McCutcheon — so named because she was born 96 years ago on Armistice Day — grew up in Reedy, population 350.

Nearly a century later, she lives in Hubbard, where she and her late husband of 70 years, Bob Hopkins, raised their family.

“I had graduated from high school in 1941 when the war began,” Hopkins reminisced. “There wasn’t much to do in my little country town, but there was a man in town with several trucks who had a contract with the government after Pearl Harbor to provide eggs for the military. He hired me to candle the eggs.”

Candling is when a bright light is shined next to the egg to allow a person to see features inside the shell — specifically to know which eggs are fertilized and how each embryo is developing.

In October 1942, Hopkins accompanied a girlfriend on a trip to Akron to apply for a job at the Goodyear Aircraft Corp.

“We went up, we got the job,” Hopkins said. “We started training the next day. They gave us room and board and trained us to be riveters.”

Hopkins’ job was to rivet the wings of B-26 and B-29 bombers for $35.54 a week. The wings were then shipped to Omaha, Neb., to be affixed to the planes. She still has her Goodyear Aircraft Corp. service certificate.

“The work wasn’t extremely hard, but it was vibrating,” she said.

The riveters were young women who had left their homes — some for the first time ever — to travel alone to strange cities for factory jobs few women had ever held, she said. Some were fresh out of high school.

As Christmas approached one year, Goodyear gave all the Rosies in Akron time off to go home for the holidays. There were so many that the buses and trains were full.

Hopkins remembered, “I was so homesick, but didn’t go down and make reservations at the bus station like I should have. So all the buses were full.”

She was not alone. There were too many ladies and not enough seats. The bus driver suggested they try the train station. But the train was full, too.

The station master took pity on them: “I’ll tell you what I’ll do,” he said, addressing them together inside the station. “I’ll add an empty box car to the train and you can all sit on your luggage during the trip. It will be a cold rough ride, but it’ll get you home.”

Hopkins said that’s how she and others rode south — on their hard-shell suitcases, keeping their spirits up singing wartime anthems like “The U.S. Air Force” song ( “Off we go into the wild blue yonder…”).

“It was a much closer feeling of togetherness than we would have had in regular coach,” she said. “It was so much fun.”

Hopkins is one of the area’s living Rosies honored Friday night during the annual Pearl Harbor and Beyond commemoration at Kent State University at Trumbull. The theme this year was “Stepping Up,” to honor all Americans, civilian and military, who stepped up for their country during the war effort.

When the war ended, Hopkins returned to West Virginia, where she attended Alderson Broaddus College and met and married her husband. A few years later, they moved to Hubbard when Bob took a job at Youngstown Sheet & Tube. Miriam and Bob raised five children together.

“It’s a wonderful small congregation — warm, loving, welcoming people. They have been my extended family for all these years and my family has always been the most important things in my life,” she said.